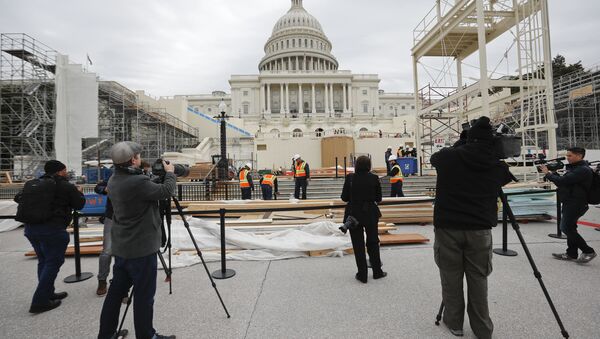 Job advertisements running in 20 cities across the US are offering $2,500 a month for “operatives” willing to protest the upcoming inauguration of US President-elect Donald Trump.

San Francisco-based Demand Protest posted ads on Backpage.com, seeking applicants who would like to "Get paid fighting against Trump!" Along with the monthly $2,500 retainer, the company offers a "standard per-event pay of $50/hr, as long as you participate in at least 6 events a year," and full-time operatives are eligible for vision, dental and health insurance.

Demand Protest describes itself as the "largest private grassroots support organization in the United States, and the ads entice potential applicants to “Get paid fighting against Trump!"

It explains, "We pay people already politically motivated to fight for the things they believe. You were going to take action anyways, why not do so with us!…We are currently seeking operatives to help send a strong message at upcoming inauguration protests." according to the Washington Times.

The ads appear as over 100 organizations have mobilized nationwide to demonstrate during the upcoming inauguration. Targeted cities include New York, Chicago,  Los Angeles, Houston, Dallas, Charlotte, Detroit and Denver.

In November 2016 a story circulated about a man claiming to have been paid $3,500 to protest a Trump rally in Fountain Hills, Arizona, after answering an ad on Craigslist.

Countering claims from the Trump camp that the Bernie Sanders campaign was paying protesters, 37-year-old Paul Horner said, "As for who these people were affiliated with that interviewed me, my guess would be Hillary Clinton’s campaign…The actual check I received after I was done with the job was from a group called ‘Women Are The Future.’ After I was hired, they told me if anyone asked any questions about who I was with or communicated with me in any way, I should start talking about how great Bernie Sanders is."

Fact-checking website PolitiFact debunked Horner’s claims, pointing out that he has posted numerous fabricated news stories, making them seem legitimate by creating news sites that appear to be trustworthy sources.

Some of these stories go viral, generating thousands in ad sales. Horner later admitted he concocted the story, telling the Washington Post that, "(Trump’s) followers don’t fact-check anything — they’ll post everything, believe anything," adding that then-Trump campaign manager Corey Lewandowski, "posted my story about a protester getting paid $3,500 as fact. Like, I made that up. I posted a fake ad on Craigslist."

Demand Protest appears to offer anonymous resistance for parties who want to engage in political opposition without having to deal with the fallout.

"With absolute discretion a top priority, our operatives create convincing scenes that become the building blocks of massive movements. When you need the appearance of outrage, we are able to deliver it at scale while keeping your reputation intact." the site reads.

There are some who believe that the rhetoric on the Demand Protest site indicates that the entire operation is a hoax, but they claim to have provided nearly 2,000 operatives in 48 cities, without offering further detail, also featuring vaguely-worded testimonies from unnamed satisfied clients.