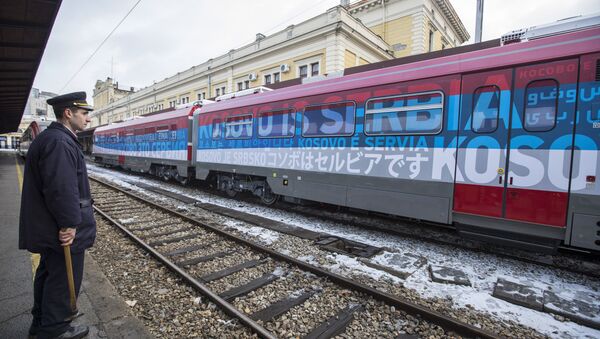 © AFP 2021 / Oliver Bunic
Subscribe
There are growing concerns over the increase in tension in the Balkans, with Serbian President Tomislav Nikolic accusing Kosovo of "wanting war" after a Serbian train was halted before entering Kosovo due to reports it was the target of a planned attack.

Nikolic raised the warning after Kosovan officials prevented the Serbian train, which contained signs saying "Kosovo in Serbian," from entering Kosovo over the weekend.

"Yesterday, we were on the verge of clashes," he said after meeting with Serbia's top security body.

I'll be candid about #Kosovo and the north of #Cyprus: Serbia+the Republic of Cyprus are legally entitled to reclaim, by force, these areas.

"We are a country which has to protect its people and its territory."

Kosovo, which has a majority population of ethnic Albanians, declared independence from Serbia in 2008 after a bloody war and NATO intervention, however Serbia has never recognized Kosovo's independence, considering the former province to still be a part of its territory, while Belgrade also supports the Serb minority living in Kosovo.

Kosovo: Train a 'Message of Occupation'

The latest spat occurred after the Serbian train left Belgrade for Kosovo's northern town of Mitrovica on Saturday, January 14.

However the train was stopped while still in Serbia after Pristina said it had deployed special forces to prevent the train from crossing the border.

​Leaders in Kosovo viewed the train as a provocation, saying it sent "a message of occupation."

"The institutions of the Republic of Kosovo will always undertake such actions to protect the country's sovereignty and not allow machines that will provoke with a message of occupation," Kosovo Prime Minister Isa Mustafa said.

Republic of Kosovo fully committed to freedom of movement but will not allow provocation. (Full Press Statement: https://t.co/sdJmMnSdQ2)

While always tense, relations between Serbia and Kosovo worsened earlier this month when former Kosovo Prime Minister Ramush Haradinaj was arrested in France after Serbia had issued an arrest warrant, accusing him of committing war crimes.

Ethnic Albanians make up 90 percent of Kosovo's 1.8 million population, while it's also home to around 50,000 Serbs.

​The development also comes amid ethnic tension in Bosnia, with officials from the Serb-dominated Republika Srpska (RS) defying EU, US and Bosnian warnings not to celebrate the region's self-proclaimed independence day on January 9.

Despite the holiday being declared unconstitutional by the Bosnian High Court, RS officials took to the streets to demand more autonomy.

000000
Popular comments
Obama leaving the US and the world in chaos and war. And he can't balme it all on a GOP Congress. The Dems had the WH and US Congress in 2009-2011 and did NOTHING good with it. All the Democrats want to do is force social changes that transvestites in the ladies restroom or 2 men getting married or attacking Christian beliefs every chance the Democrats get or trying to disarm the public, etc.
jas
16 January 2017, 20:32 GMT1
000000
Serbia, should take back by force Kosovo, who is belong to Sebia. Americans have destroyed all the balkans, and now the Arabs are buying all Balkans at the request of Americans. That is why Serbia making big mistake allowing Gulf countries to buy Serbia. Serbia making mistakes after mistakes and not learning from mistakes. Russia should be the only support to Serbia, and Serbia will grow big.
mounir.assi
16 January 2017, 20:53 GMT1
000000
Newsfeed
0
New firstOld first
loader
LIVE
Заголовок открываемого материала
Access to the chat has been blocked for violating the rules . You will be able to participate again through:∞. If you do not agree with the blocking, please use the feedback form
The discussion is closed. You can participate in the discussion within 24 hours after the publication of the article.
To participate in the discussion
log in or register
loader
Chats
Заголовок открываемого материала
Worldwide
InternationalEnglishEnglishMundoEspañolSpanish
Europe
DeutschlandDeutschGermanFranceFrançaisFrenchΕλλάδαΕλληνικάGreekItaliaItalianoItalianČeská republikaČeštinaCzechPolskaPolskiPolishСрбиjаСрпскиSerbianLatvijaLatviešuLatvianLietuvaLietuviųLithuanianMoldovaMoldoveneascăMoldavianБеларусьБеларускiBelarusian
Transcaucasia
ԱրմենիաՀայերենArmenianАҧсныАҧсышәалаAbkhazХуссар ИрыстонИронауОssetianსაქართველოქართულიGeorgianAzərbaycanАzərbaycancaAzerbaijani
Middle East
Sputnik عربيArabicArabicTürkiyeTürkçeTurkishSputnik ایرانPersianPersianSputnik افغانستانDariDari
Central Asia
ҚазақстанҚазақ тіліKazakhКыргызстанКыргызчаKyrgyzOʻzbekistonЎзбекчаUzbekТоҷикистонТоҷикӣTajik
East & Southeast Asia
Việt NamTiếng ViệtVietnamese日本日本語Japanese俄罗斯卫星通讯社中文（简体）Chinese (simplified)俄罗斯卫星通讯社中文（繁体）Chinese (traditional)
South America
BrasilPortuguêsPortuguese
NewsfeedBreaking
13:39 GMTHitting US Debt Ceiling Could Trigger Recession, White House Says
13:32 GMTUnited Airlines Briefly Grounded Flights in US, Canada Due to Computer Issues, FAA Says
13:29 GMTDutch Acting Defense Minister Resigns Over Kabul Evacuations Chaos, Reports Suggest
13:27 GMTFrance Says It Cannot Trust Australia in Trade Talks After Canberra Ditched Joint Sub Deal
13:20 GMTPiers Morgan Says His New Job Will Be 'Stuff of Nightmares' for Meghan Markle
13:18 GMTIndonesia Wary of Australia's Plans to Acquire Nuclear Submarines
13:14 GMTUS Slaps New Hezbollah-Related Sanctions on Several Individuals
12:57 GMTPakistan Will Get ‘Badly Burnt’ If It Courts the Taliban Beyond a Point, Warns Author
12:51 GMTUS General Mark Milley Reportedly Downplayed George Floyd Protests' Severity in Talks With Trump
12:51 GMTIs Narendra Modi Emerging as the Most Sports Loving Indian Prime Minister?
12:28 GMTFAA Bans Drone Flights Over Texas Bridge After Thousands of Haitians Filmed Flocking to Area
12:27 GMT'Show Got It Wrong': Priyanka Chopra Apologises After Taking Flak Over 'The Activist' Format
12:05 GMTNicki Minaj Tweet That COVID-19 Vaccines Cause Impotence Sparks Protest Outside CDC HQs - Video
12:01 GMTPelosi Asked After Capitol Riot If WH Staff Did Anything But 'Kiss' Trump's 'Fat Butt', Book Claims
11:48 GMTArmenian Police to Block Streets Near Central Square Due to Planned Rallies
11:32 GMTUK Military 'Actively Recruiting' New Spies for Deployment in Asian Region Amid AUKUS-Caused Waves
11:14 GMTPunjabi Activists Clash With Police in Delhi During Anti-Farm Law Protests - Video
11:07 GMTClip of Man With Crossbow on Balcony in Netherlands Emerges Online Amid Reports of Stabbing Attack
10:48 GMTTwo Killed, One Injured in 'Crossbow Attack' in the Netherlands
10:44 GMTRussia Says IAEA Should Monitor Process of US Handing Nuke Tech Over to Australia