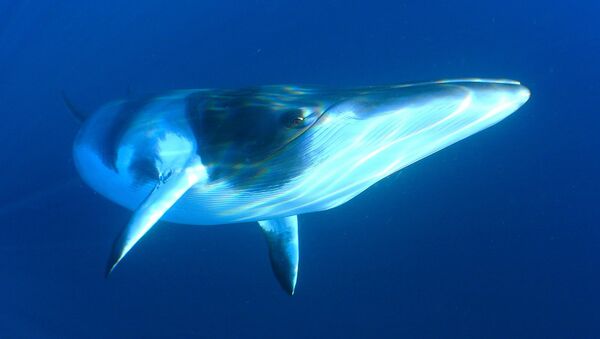 The activist ocean conservation group Sea Shepherd said Sunday that it found a slaughtered minke whale on a Japanese ship that had been illegally whaling in Australian waters.

Australia 'Disappointed' by Planned Restart of Japan's Whaling Program
It is the first incident to be documented since Japan lost against Australia in a case on whaling in the International Court of Justice.

The dead animal was spotted on the Nisshin Maru whaling vessel in Australia's whale sanctuary in the waters of Antarctica. The Sea Shepherd's helicopter tracked the ship and two harpoon vessels after a five-week hunt for the Japanese fleet.

When the crew heard approaching helicopters, they tried to hide the dead whale beneath a tarpaulin, the activists say.

"The fact that the Japanese crew went to cover up their harpoons and the dead minke whale on deck just shows that they know what they're doing is wrong," Wyanda Lublink, the captain of the group's 59-meter flagship Steve Irwin, said in a Sea Shepherd statement.

Jeff Hansen, managing director of Sea Shepherd Australia, emphasized that the whales are being killed in an extremely cruel way.

​"They're hit with an explosive harpoon that goes straight into their body. Hooks come out and shrapnel is sent through their body; it's a terrible, bloody death," he said. "These whales can take up to 30 or 40 minutes to die."

Latest Bid for South Atlantic Whale Sanctuary Another No-Go
Japan is a signatory to the International Whaling Commission's moratorium on the practice of commercial whaling, which has been in force since 1986. Japan insists that since then it has only been whaling for "scientific research," but the activists doubt that slaughtering more than 8,000 minke whales in the past three decades for that purpose was necessary.

Australian Minister for the Environment and Energy Joshua Anthony referred to the news as "disappointing."

"Australia is opposed to all forms of commercial and so-called ‘scientific' whaling," he said, as cited by the Guardian. "It is not necessary to kill whales in order to study them."

The news came only a day after Prime Minister Shinzo Abe visited Australia to meet his counterpart, Malcolm Turnbull, for talks focusing on trade and defense.