Muslim Students in Germany Do Not Believe in Evolution 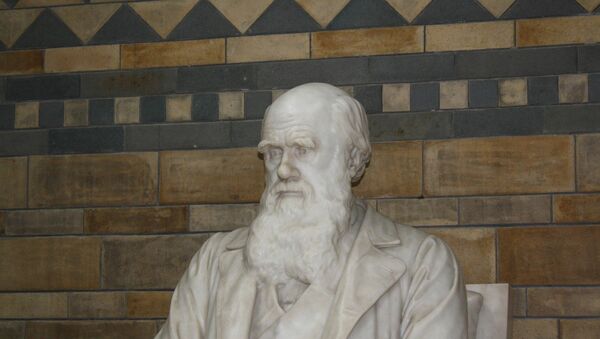 © East News / Universal History Archive/UIG
Subscribe
Fifty-nine percent of Muslim students in Germany, including would-be teachers, ignore Darwinism and refuse to believe that humans descended from apes, according to a study just published by a team of Giessen University experts.

Allah instead of Darwin?

Muslim students are walking out of lectures on evolution claiming it conflicts with creationist ideas established in the Koran.

Deep Sea Crust Reveals Supernovas That Changed Course of Human Evolution
Only 41 percent of those polled agreed that the evolutionary theory was scientifically-recognized concept.

While over 80 percent of Evangelicals, Catholics and non-observant Christians believe in Darwin’s theory, the majority of members of the Free Church and Muslins deny it.

Among non-churchgoing students the ratio is 84 to 41.

“Evolution is a hard fact. To deny it is like saying that the Earth is flat,” Dittmar Graf, the study’s main author, said in an interview with Sputnik German.

Dittmar Graf said that he was worried to see such a huge percentage of would-be teachers, people responsible for future generations of Germans, denying such a well-established scientific theory as Darwinism.

“Happily enough, education in Germany is based on scientific knowledge each teacher is supposed to get across to his pupils. No one cares what he or she really thinks about science,” Dittmar emphasized.

Michael Schmidt-Salomon, a philosopher with the Giordano Bruno Foundation, which promotes the theory of evolutionary humanism, sees the fact that so many future Muslim teachers deny the Darwinist theory as “an educational catastrophe.“

“People who do not understand the processes of evolution cannot promote any modern picture of people and the world,” he said.

Whence this loss of faith in science?

Dittmar Graf blamed this denial of scientific knowledge on the process of socialization and the quality of teaching.

Witness the Evolution: Salmon Crosses the Road
“Classes on evolution in Germany usually come at the end of the day. Our elementary school-goers simply know nothing about evolution. All they hear are myths about Creation they are told  during religion classes,” he said.

He added that he would like to see schoolchildren learning about Darwin’s theory early on.

“The kids want to know about this but we simply have no elementary schools in Germany where they can learn this,” Dittmar Graf complained.

000000
Popular comments
Linear descent of species is a "just so" theory and not at all scientific. Received knowledge from pseudo scientists is as false as from any other source.

AnomicDust
16 January 2017, 17:22 GMT
000000
AnomicDust, I disagree. It started out as a theory, but by know through scientific research there is more than enough evidence.