Local Germans Want US Tanks to 'Get Out' 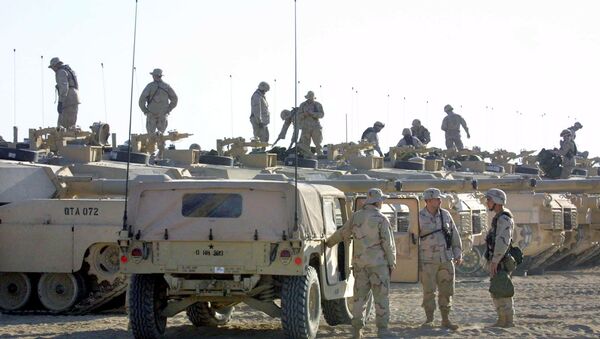 © AFP 2021 / RABIH MOGHRABI
Subscribe
The inhabitants of Cottbus, Germany have criticized the transfer of American tanks through their city. While speaking with Rundfunk Berlin-Brandenburg radio station, they called the move a "provocation" and demanded an end to the confrontation with Russia.

Germany Counts Cost of Biggest US Military Shipment to Europe Since Cold War
One of the city's residents noted that tanks going to the East "horrified him" and reminded him of his childhood when columns of German soldiers moved towards the western border of the USSR.

He believed that Warsaw's statements about Moscow's possible "aggression" are "clearly exaggerated."

"I do not believe that Russia would attack Poland," the man told the radio station.

The US tanks have been transported toward Polen today as well. Here at Cottbus train station.

Another respondent said that Germany hasn't even tried to maintain dialogue with Russia. He said that the military build-up near the Russian border is "wrong" and called it a "provocation."

Another Cottbus resident demanded that Germany's "so-called friends" should "get out" of German territory.

"I do not know how long Putin will just watch all this. We must develop a friendly dialogue. We do not need a confrontation," the man said.

No one is interested when American tanks are moving from Germany through Poland to Russia. But what if Russia would do it visa versa.

As a pretext for its military build-up in Eastern Europe, the US has used claims of alleged Russian military interference in Ukraine, which Russia has repeatedly denied. The military equipment is supposed to be a part of NATO's mission to contain alleged "Russian aggression" against Baltic States and Eastern European countries.

000000
Popular comments
USA is playing with the life's of Europeans. All this warmongering by Washington and NATO is totally unnecessary, and it is a game of the bankers and the American war machine because they want to rule the world, and Russia is in its way.