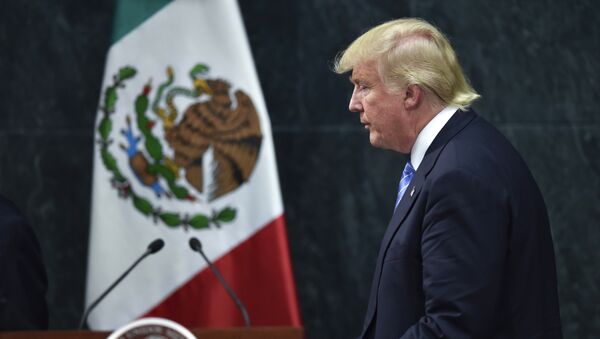 © AFP 2023
Subscribe
International
India
Africa
A group of Mexican stock brokers has come up what they facetiously say may be a brilliant idea: buying up Twitter Inc. and immediately shutting it down to prevent President-elect Donald Trump from bashing the country's economy using the social media platform.

Mexican Peso Drops to Historical Low in Wake of Trump's Wall Remarks
Calculating that Trump's tweets about Mexico have had a major impact on the value of the peso, traders, according to Bloomberg, have come up with a cunning plot – to buy Twitter (currently valued at about $12.5 billion) and to take it offline, thus depriving Trump of his social media soapbox.

According to the business news resource, the idea is really more of a joke, although it does have "a certain logic to it." The discussions began this week after Mexico's Central Bank confirmed that they had spent $2 billion in reserves trying in vain to defend the peso against a stream of 'anti-Mexican' tweets by Trump, mostly having to do with the economy and the need to bring  jobs and factories back to the USA.

Bloomberg has even created a handy chart showing how Trump's comments on Twitter and elsewhere impact the value of the Mexican currency.

Bloomberg charts the relationship between the Mex peso and Trump's tweets https://t.co/ftberEHQMc pic.twitter.com/eTTLB4qQMt

"I would suggest they do it fast," Juan Carlos Alderete, a forex expert at the Mexican banking and financial services company Banorte Ixe, jokingly told the business news agency. "Because we can barely afford it now," he added.

Whither the Donald? Investors Divided Over Perception of Trumponomics
The value of the peso has been steadily dropping against the dollar ever since Trump's election. In addition to Trump's statements, the currency has been hit by recent announcements by US manufacturers, including Carrier and Ford, that they would be cancelling investments in Mexico in favor of the US.

For instance, earlier this month, Trump attacked General Motors on Twitter, saying that if the company sells its Mexican-made Chevy Cruze in the United States, it should pay a border tax. A few hours later, Ford canceled plans to build a $1.6 billion factory in Mexico, adding that it would invest $700 million in a Michigan-based manufacturing plant instead.

Noting that it was unlikely that the Mexican stock traders would actually carry through with their idea, Bloomberg complained that the proposal, "even raised in jest," demonstrates "just how frustrated Mexicans are that their economy and the value of their savings are at the mercy of the seemingly random musings coming in 140-character bursts from Trump's Twitter account."