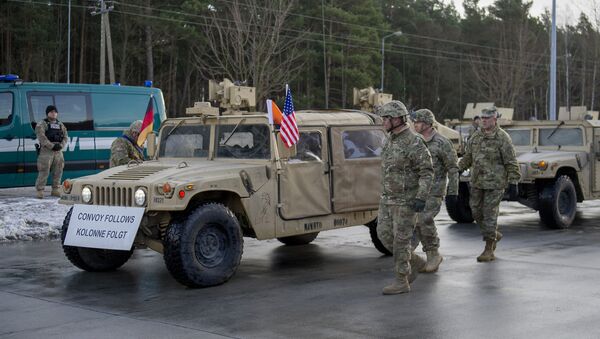 Critical of the decision to send thousands of US troops and military vehicles to Eastern Europe via Germany, members of Germany's Die Partei (The Party) met with US troops in Germany on their way to Poland and elsewhere in Eastern Europe.

Germany Counts Cost of Biggest US Military Shipment to Europe Since Cold War
Germany's Die Partei (The Party) was established in 2004 by satirist Martin Sonneborne, former editor of the satirical magazine Titanic. In 2014 it received its first parliamentary seat, when Sonneborne was elected to the European Parliament.

Many of its proposals are parodies of serious political proposals. For example, after the UK's Brexit vote Die Partei proposed throwing some more countries out of the EU for good measure.

In the European Parliament, Sonneborne proposed reinstating EU Commission Regulation 2257/94, an often-ridiculed piece of legislation which regulated the production of bananas and cucumbers, including their length, shape and texture. However, instead of fruit and vegetables, Sonneborne wanted to apply the law to export weapons. Weapons with a curved barrel would be unusable, he explained.

As US soldiers made their way from their German bases to Eastern Europe last week as part of Operation Atlantic Resolve, Die Partei members went to meet them.

On Friday the US transferred the largest shipment of military equipment to Europe since the end of the Cold War, when three freight ships of more than 2,500 military vehicles arrived in the north German port of Bremerhaven. The operation plans to station 4,200 US troops in Poland, Bulgaria, Romania and the Baltic countries.

Philipp Hennig, Die Partei chairman in the town of Frankfurt an der Oder, on the border with Poland, met with US soldiers who had stopped in the town on the way to their nine-month deployment in Eastern Europe.

He told Sputnik Deutschland that his attire, a uniform similar to that worn by soldiers in the former East Germany, gave him something to talk about with the soldiers, because they were in uniform too. The US soldiers seemed like nice guys but it was tough to keep the conversation going, Hennig said.

'Die Partei of Frankfurt an der Oden part with US troops traveling east.. smiley!' the party posted on Facebook.

"We talked about Coca Cola, burgers and Mickey Mouse. As a pacifist, I did not have so much in common with the soldiers and I didn't know what to talk about. In the end, our security officer Tobias Dietrich also signaled that he was not quite sure whether they understood German at all."

Hennig added that he has concerns about the transfer of the military equipment to Europe and its impact on regional security. The deployment of US troops across the globe since 1945 has not made the world safer, he noted.

"In my opinion, any major movement of military technology is to be carried out with caution, unless it is going to the scrap yard. In our party manifesto we propose that all decisions on Eastern Europe policy should first go to a 75-year-old, because the 50-year-old bureaucrats who are taking political decisions now no longer understand historical contexts."

"In addition, as far as we know, the (deployment of) NATO troops east of Frankfurt (Oder) also violate the agreements made by Gorbachev and Kohl."

In an interview with Sputnik Deutschland in August, Die Partei leader Sonneborne said that his party does not adhere to the traditionally pro-American political position of Germany's mainstream parties.

Silent US Trade War With EU Behind Targeting of Germany's 'Big Fish'
He said he would like to invite Russian President Vladimir Putin to the European Parliament, or to Germany for a Schnitzel in the German Bundestag.

"I would like to speak with Vladimir Putin. As a party we are not as strictly pro-American and America-orientated as the other parties traditionally are. I have a Palestinian hairdresser and he knows a lot about politics. That's why I go to him. He recently asked me, why don't we trade more with Russia? Why are we so terribly West-aligned?' And I couldn't really disagree with him," Sonneborne said.

Ahead of state elections in Berlin in September, in which Die Partei gained two percent of the vote, the leader explained that his party positions itself as a protest vote against mainstream parties.

"There are two parties in Berlin which people looking for a protest vote can choose if they are not satisfied with the established system. The idiots choose one party, Alternative for Germany, and the intelligent ones, let's say the one who finished school, choose Die Partei," Sonneborne said.