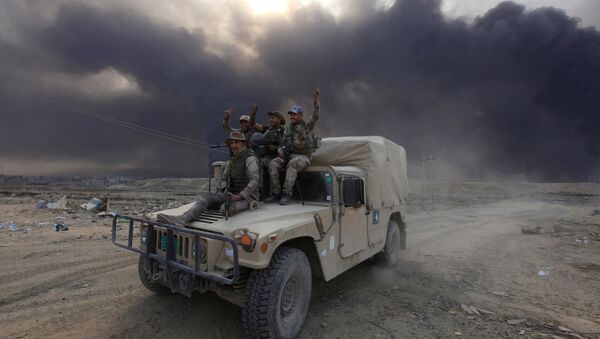 On Monday, outgoing CIA Director John Brennan acknowledged that the 2003 US invasion of Iraq was "the reason why there was the tremendous slide into violence and bloodshed in that part of the world." Russian political analysts spoke to RIA Novosti about the possible reasons for such an admission just before the change of administrations.

He added that although the people in the region wanted individual freedom, "the concept of democracy is something that really is not engrained in a lot of the people and the cultures and the countries out there."

"I think there were very, very unrealistic expectations in Washington, including in some parts of the administration, that the Arab Spring was going to push out these authoritarian regimes and democracy is going to flourish because that's what people want," he elaborated.

During the hour-long conversation, the head of the intelligence service singled out the 2003 invasion of Iraq as "the reason why there was the tremendous slide into violence and bloodshed in that part of the world."

"If we knew then what we know now in terms of what ISIL (Islamic State, Daesh) was able to do, in terms of just this explosive growth in Iraq that then was able to lop over into Syria, would we have pursued the same course? Probably not," Brennan said later.

Commenting on his remarks, General Director of the Russian Council on Foreign Affairs Andrei Kortunov told RIA Novosti that there was no way to predict the terrible consequences of the Arab Spring that the region is now experiencing five years later.

CIA Chief 'Largely Responsible for Chaos' in Syria, Not Russia
"It was possible to gauge certain tendencies however it wasn't possible to predict the actual events and changes in the region. Unlike with the war in Iraq, with the Arab Spring, the US was not the instigator of the changes," he said.

"The American strategists have been taken by surprise by the processes which started off in Egypt, Tunisia and other countries.  Ultimately, the US was quite satisfied with the regime of Hosni Mubarak in Egypt and there was no urgent need to change it," he added.

Meanwhile Fedor Lukyanov, head of the presidium of the Russian Council for Foreign and Defense Policy said that the Arab Spring is a product of the deep destabilization of the Middle East, which, apart from certain objective internal factors had external support.

"The destruction of the Iraqi state, imposition from outside of certain democratic procedures, in particular, elections in Palestine which ended up with the election of the HAMAS movement, specific diplomatic pressure with the ultimate goal of regime change – all of this has led to the even further shattering of the already largely dilapidated mechanisms of a number of states," he told RIA Novosti.

The political analyst added that even though it is hard to say for sure that the Arab Spring was solely the product of American foreign policy, it should be admitted that Washington has had a serious hand in creating chaos in the Middle East based on the expectation that it was manageable. However the chaos has spiraled out of control and further US actions in Libya and Syria have only exacerbated the situation.

Semyon Bagdasarov, Director of the Center for Middle Eastern and Central Asian Studies said that the mistakes of politicians are based on the mistakes of those who pave the way for their decisions and intelligence services, which provide the information that supports these decisions, play a leading role in the process.

"The problem is that intelligence services exist and operate hand in hand with the political leadership, they are incorporated into the state apparatus and are politicized," he said.

"Even though there are highly experienced personnel in the analytical centers, able to estimate the situation and the consequences of a certain operation, their voices are inevitably drowned out in the information flow being provided to the leadership," he added.

The expert then suggested that Brennan's revelations highly resemble some "final accord," a sort of summing-up of the results of his work as the CIA head.

"He has been saying what he was unable to say while being at the post and now, just days before his departure, he admits yes, there were mistakes. The aim is to be able to then claim "yes, I was honest," Bagdasarov said.

"So he is trying to save his face for further possible career growth," he suggested.

Andrei Kortunov however suggested that it is an attempt to try to let the new foreign policy laid out by president-elect Trump take root.

Obama's Farewell Tears Are an Insult, His Record is Soaked in Blood
"Trump repeatedly said that the US should not instigate any regime changes and that the Middle East is not within the scope of American interests. The top priority for the US should be the fight against international terrorism," he said.

This has resonated with the US electorate who voted for Trump, he added. Hence now the outgoing CIA head is leaving to his successor somewhat of a political will, urging him to learn from his own mistakes.

The experts however did not rule out that there is another, purely bureaucratic reason behind the above remark and it is to keep the majority of the personnel in their posts and underline the ultimate value of the agency, which is yet to fight in a tough battle for the budget.

They also added that the mere facts that such revelations were voiced just days before the inauguration might signal that there are people in the outgoing administration who support the upcoming changes in the policy of their home country.