The CIA Has Spoken: Fate of US Democracy in the Hands of Just One Russian Woman! 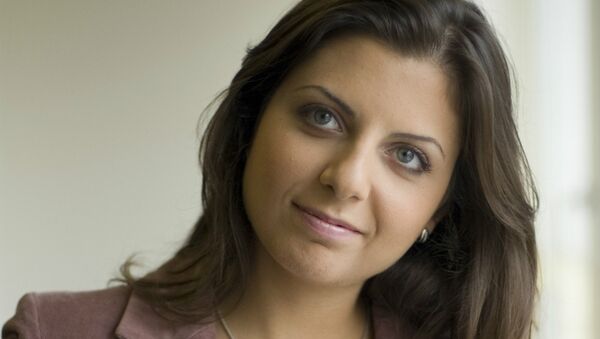 US intelligence singled out RT and Sputnik editor-in-chief Margarita Simonyan as the mastermind of a large-scale campaign designed to support Donald Trump's bid for the US Presidency.

The Russians Are Coming? C-SPAN Flubs, Accidentally Airs RT
If the US intelligence community is to be believed, this lone Russian journalist was able to orchestrate a large-scale media campaign powerful enough to affect the election process in one of the world’s most powerful nations.

This theory however has one major flaw – no individual could possess the kind of power and influence that are attributed to Simonyan by US intelligence analysts, President of Brazil’s National Federation of Journalists Maria Jose Braga told Sputnik Mundo.

"This focus on the journalist that heads the aforementioned Russian media [RT, Sputnik], as if she is responsible for alleged meddling in the US presidential election, results in attributing to her the professional power which simply does not exist under any normal circumstances. It is impossible for one person to determine the state policy," Braga said.

On January 6, the US Intelligence Community released a report saying it has "high confidence" in Russia’s meddling in the 2016 presidential election. The name of Margarita Simonyan is mentioned in the report 27 times; the report’s authors accuse her of using the RT and Sputnik media agencies in order to try and sway US public opinion in accordance with the Kremlin’s will.

Braga, however, pointed out that the report contained no real evidence of any alleged Russian meddling in the US presidential election.

"There is no proof of actual or attempted interference in the elections… Every country has its own communication policy. Russia has one as well and has every right to exercise it," she remarked.

It should be noted that certain media outlets echoed the concerns of the US intelligence. For example, an article called 'Margarita Simonyan, the Young Female Boss of Russian Propaganda,' published in Argentine newspaper La Nacion, labeled the RT chief as "the most dangerous journalist on the planet."

"This La Nacion article, written by a female journalist, is a fine example of anti-journalism. Instead of specifics and facts it contains an opinion about a professional who, in this particular case, is a woman. And where’s a female public figure, there’s always sexism. Her appearance doesn’t matter when it comes to her professional activities," Braga added.