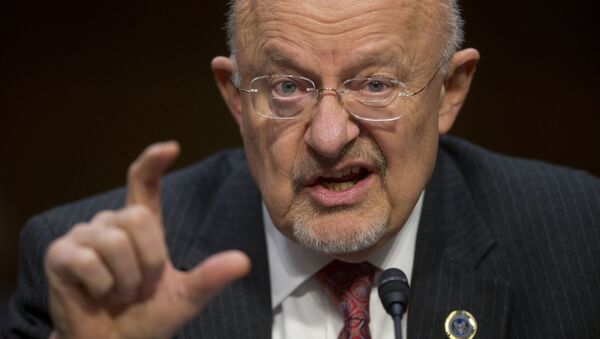 © AP Photo / Pablo Martinez Monsivais
Subscribe
US Director of National Intelligence James Clapper has stressed that the recently circulated documents compromising US president-elect Donald Trump have nothing to do with the US Intelligence Community.

WASHINGTON (Sputnik) – On Tuesday, CNN and BuzzFeed reported on memos, compiled by an unnamed former intelligence officer from the United Kingdom, which allege that Trump has been groomed and supported by Russian intelligence for at least five years.

"I emphasized that this document is not a U.S. Intelligence Community product and that I do not believe the leaks came from within the IC. The IC has not made any judgment that the information in this document is reliable, and we did not rely upon it in any way for our conclusions," Clapper said in a Wednesday statement, after speaking with Trump.

The documents, which BuzzFeed admitted were unsupported and which the CNN did not fully disclose due to lack of independent corroboration, also alleged that Russian intelligence had compromising material on Trump related to his "unorthodox behavior" during a visit to Russia.

Clapper stressed on Wednesday that the reports compromising Trump are "extremely corrosive and damaging to our national security."

The Wall Street Journal reported on Wednesday that Christopher Steele, a former intelligence officer from the United Kingdom, has been identified as the author of the alleged Russian dossier on Trump. Steele currently heads the private security and investigations firm Orbis Business Intelligence.

000000
Popular comments
So who lies here? CNN tells they got it from Clapper, Clapper tells nothing to do with him.. Sooooooomebody is lyyyyiiiiing.