Obama's Farewell Tears Are an Insult, His Record is Soaked in Blood 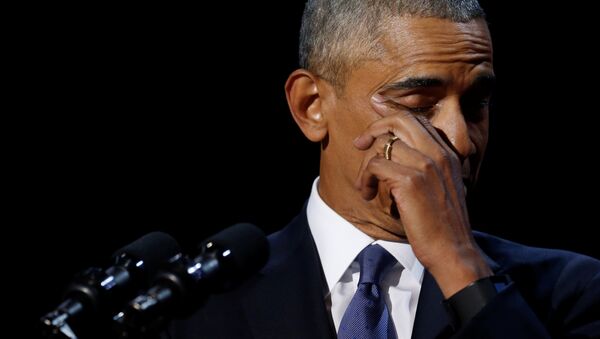 John Wight
All materials
Do not be fooled by the tears and gushing words of Obama and his supporters as he counts down to his departure from the White House. They are an insult when measured against the tears of the countless Libyans, Syrians, Afghans and others who have suffered as a result of a foreign policy that brought his administration into disrepute.

Barack Obama goes down in history as a president who more than any other in living memory entered the White House on a wave of hope and expectation, only to depart eight years and two terms later under a cloud of crushing disappointment and bitterness.

In speech after speech, America's first black president outlined a vision of his country's place in the world that would embrace multilateralism, place a premium on diplomacy, and embrace a foreign policy underpinned by justice. He also pledged to close the controversial US detention facility at Guantanamo Bay. Eight years later it's impossible to avoid the conclusion that he lied.

When it comes to the Middle East, although Obama certainly cannot be blamed for creating the disaster in Iraq — for this we have the war unleashed on the country by his predecessor, George W. Bush, in 2003 to thank — his actions upon entering the White House in 2009 made the situation worse.

The military surge, begun in 2007 under the Bush administration with the deployment of thousands of additional US troops to the country's Anbar province (Sunni Triangle), had been designed to end the brutal sectarian control of al-Qaeda in Iraq (AQI) over the province. Within a year it had succeeded in reducing the terrorist group to the point of near extinction. In partnership with Anbar's Sunni tribes, who'd suffered under the iron heel of the terrorist group, US forces had embarked on an aggressive policy of seek and destroy. It was an innovative and successful operation that not only succeeded militarily but also in terms of winning the hearts and minds of the country's Sunni minority.

Unconscionably, Obama ended the surge while continuing to support the Maliki government in Baghdad, whose sectarian policies favouring of the countries Shia majority at the expense of the Sunni minority led to the revival of AQI's fortune. In 2013 the group changed its name to Islamic State in Iraq (ISI) and at the beginning of 2014 succeeded in taking control of Fallujah, just 57km from Baghdad, where its notorious black flag first came to international attention.

In attempting to underplay the significance of the growing strength of ISI in Iraq, Obama infamously compared the terrorist group to a junior varsity (jayvee) team — in other words a threat of no great consequence. How wrong he was.

In June 2014, ISI launched offensives against Tikrit and Mosul, taking both cities, before moving across the border into Syria. There it morphed into Daesh (also known as ISIS/ISIL), establishing a reign of barbarism, terror, and cruelty such as the world hasn't seen since the Khmer Rouge ravaged Cambodia in the 1970s.

It was a disaster that had arrived in the Middle East on the coattails of a so-called Arab Spring that saw the Obama administration throw former US and Western-supported dictatorships in Tunisia and Egypt under the bus. It did so at the same time as opportunistically throwing its weight behind the mass protests that had erupted throughout the region, doing so with the objective of ensuring that the outcome was favourable to US and Western strategic, geopolitical, and economic interests.

The destruction of Libya, wrought by Washington and its NATO allies in 2011, along with US support for sectarian terrorist groups in Syria, almost pushed the region into the abyss. When Russia entered the fray at the end of 2015, at the request of a Syrian government whose forces were overstretched and struggling to beat back a Western supported onslaught, Obama refused to accept Russia's request to join forces to defeat terrorism. Instead his administration did its utmost to impede Russian efforts. 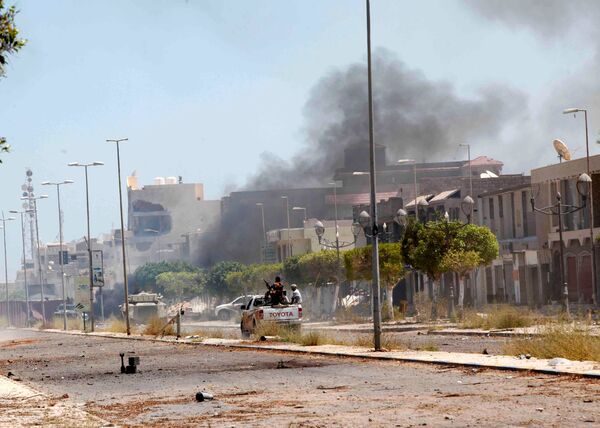 The result has been the unnecessary prolongation of the conflict in Syria and the suffering if its people. Along with the turning of Libya into a failed state, it produced a refugee crisis of biblical dimension, leading to thousands of people drowning in the Mediterranean in the act of fleeing a region plunged into chaos.

In Eastern Europe, meanwhile, the US under Obama's watch supported a fascist driven coup in Ukraine in 2014 that toppled the country's democratically elected government. The result was a civil conflict on Russia's southwestern border.

Obama Claims Rivals Like Russia, China Cannot Match US Global Influence
The attempt to paint Russia as the cause of the ensuing instability exposed Obama's mendacity and his blithe disregard for Russia's security and legitimate rights. With the arrogance of a Roman emperor, the president attempted to bully the largest and most populous country in Europe into submission over Ukraine and its role in Syria fighting terrorism reduced relations between East and West to the point of full-blown crisis, where they currently remain.

Add to his legacy a drone war that has killed hundreds of innocent civilians, and nobody should be fooled by the happy-clappy emotional farewell speeches he is currently giving in advance of his departure from the political stage.

His record in office leaves both him and his presidency disgraced.