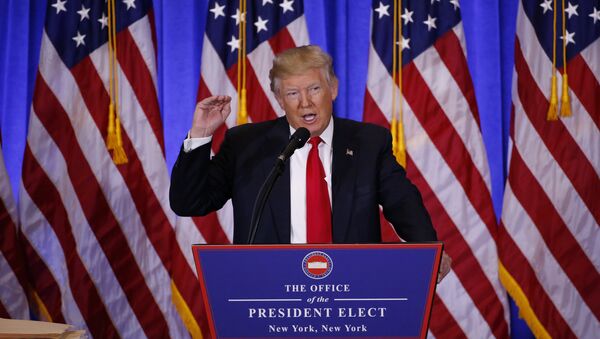 US President-elect Donald Trump has no warm feelings for the mainstream media and the feeling is reciprocal one. Therefore, when during his first press conference Trump openly accused CNN of lying no love has been lost there.

No Honeymoon for Trump

There is a tradition of honeymoon between the newly elected US president and the media, which implies that the latter would abstain from any harsh criticism toward the leader of the United States within roughly the first 100 days in the office. Judging by how his first press conference went, Trump, apparently, should forget about any indulgence.

His conflicts with the media has began already on the campaign trail. He famously had a row with a Fox News anchor Megyn Kelly in the first Republican presidential debate.

The president-elect had initially scheduled the press conference for mid-December but postponed it. It finally took place on Wednesday with several reporters never getting an opportunity to ask a question.

He turned down CNN reporter and described the broadcaster as "fake news."

"I'm not gonna give you a question. You are fake news," Trump stated.

On Tuesday, CNN and the BuzzFeed News website reported unsubstantiated memos, which allege that Trump has been groomed and supported by Russian intelligence for at least five years.

BuzzFeed also became a target of Trump's criticism, was described by the president-elect as a "pile of garbage."

"As far as BuzzFeed, which is a failing pile of garbage, writing it, I think they're going to suffer the consequences," Trump warned.

However, he called the press conference a success despite the presence of "fake news organizations."

Both CNN and BuzzFeed replied to Trump's criticism. CNN stated that it was confident in the reporting and asked Trump's team to identify any inaccuracies in it.

It added that "we are fully confident in our reporting" and stressed that the first amendment to the US constitution was the motivation behind the publication.

CNN concluded the statement by asking Trump's team to be precise while criticizing the report.

"We made it clear that we were not publishing any of the details of the 35-page document because we have not corroborated the report's allegations. Given that members of the Trump transition team have so vocally criticized our reporting, we encourage them to identify, specifically, what they believe to be inaccurate," the statement read.

One can now buy t-shirts, garbage can and several stickers referencing the phrase.

.@CNN is in a total meltdown with their FAKE NEWS because their ratings are tanking since election and their credibility will soon be gone!