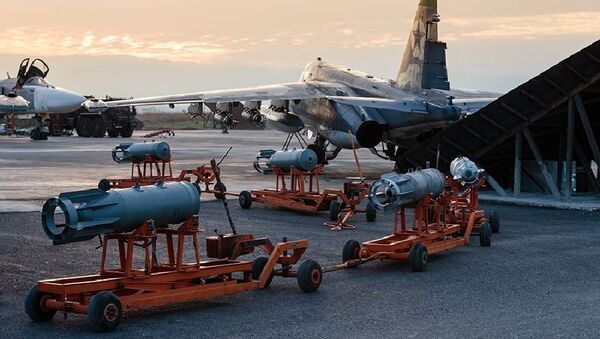 'From US for Mutual Defense': What Obama Administration Hopes to Secure in Syria
In an interview with Sputnik, Russian military expert Konstantin Sivkov described allegations regarding the Russia-US "close calls" in Syria as part of the outgoing US Administration's "information war" against Moscow.

Earlier this week, the Russian Defense Ministry's spokesman Maj. Gen. Igor Konashenkov said that the alleged Russia-US "close calls" in Syria are a "nonexistent problem" and the US has not raised any concerns during regular video conferences.

Russian pilots are very professional, and in the course of their work they observe all safety precautions, Konashenkov explained.

This statement came as a response to an earlier report by the Wall Street Journal, which cited Brig. Gen. Charles Corcoran, the commander of the 380th Air Expeditionary Wing, as saying that Russian planes in Syria allegedly came close to US aircraft despite a US-Russian agreement which was signed in October 2015 to mitigate incidents in Syrian airspace.

"It is difficult to understand whether the statements made by General Corcoran are his honest opinion or if he, like many others, was used by the outgoing US administration during the course of their Russophobic farewell spectacle," Konashekov said.

He was echoed by Konstantin Sivkov, who suggested that General Corcoran was ordered to tell about the "close calls" in Syria.

"I have information which indicates friendly ties between the American officer corps and their Russian colleagues in Syria. I think that Corcoran was ordered to make his statement, which is in line with all other well-planned actions by the United States under the Obama Administration related to the information campaign," Sivkov said.

All these actions are intended to sour Russian-American relations, according to him.

"Corcoran's statement along with a new sudden proposal on expanding anti-Russian sanctions,  Obama's statements in his farewell speech, and those by the US Secretary of Defense that Russia allegedly does not do anything in the fight against Daesh are elements of an information war," Sivkov added.

He said that those who launched the current information campaign want to completely neutralize the Russian contribution to the fight against terrorists in Syria.

"The authors of this information operation try to make people think that it is Russia which prevents the resolution of the Syrian conflict by allegedly siding with Daesh and keeping the US from effectively fighting the terrorists. So I think that Concoran talking about the Russia-US 'close calls' is a far-fetched issue," Sivkov concluded.

This is Why US-Led Coalition Pilots Blame Russia for Close Calls Over Syria
Earlier, geopolitics expert Konstantin Sokolov told Sputnik that Russian pilots engaged in counterterrorism missions in Syria have no reason to provoke US-led coalition aircraft since the Syrian crisis is on the path to being resolved through diplomatic means.