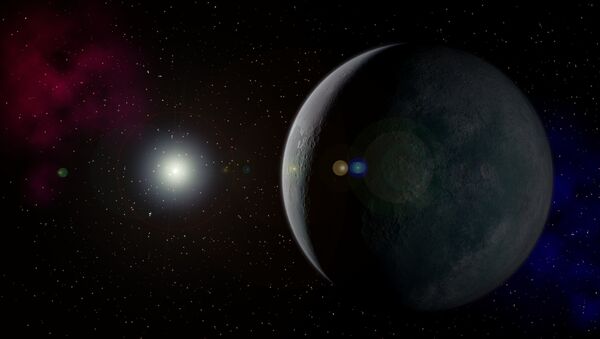 A pair of researchers have presented new simulations on Planet Nine, a theoretical planet far beyond Pluto. The simulations suggest that, if it does exist, it could be described as a rogue planet, indicating that it was not originally born in our solar system, but at some point drifted too close to our star and was captured by gravity.

Paul Mason and his student James Vesper, astronomers with New Mexico State University, presented the results of simulations on the mysterious planet at this year's American Astronomical Science meeting. The simulations show that a planet of Nine's size and distance from the Sun would likely be a rogue planet. Rogues are planets not beholden to a star's gravity, interstellar nomads who freely wander through space.

When rogues enter the gravitational pull of a star, according to Mason and Vesper, they can be captured and remain in the star's orbit. This is what occurred in 40 percent of their simulations, and what they believe was the fate of Planet Nine. The rest of the time, a rogue enters a solar system and leaves soon after. Mason and Vesper believe rogues to be far more abundant than previously thought, but rare in our own solar System.

If Planet Nine exists (something that researchers are increasingly confident of,) it will be classified as a Trans-Neptunian Object (TNO). The most famous TNO is Pluto, which was reclassified from a planet to a dwarf planet in 2005. Planet Nine, however, is believed to be an ice giant similar to Uranus and Neptune, around 10 times the mass of Earth.

Planet Nine was first proposed in 2014, when astronomers noticed strange movements of several TNOs that suggested a large object was perturbing their orbits. A 2016 paper from Michael Brown and Konstantin Batygin claimed that the chances of the TNOs behavior being coincidental was miniscule, and the most likely cause of the anomalies was the existence of a large planet at the outer reaches of the solar system.

"I'm quite certain that Planet 9 is really out there," Batygin told Gizmodo. "The number of seemingly unrelated puzzles within the solar system that are resolved by Planet 9's existence is simply too great for it all to be a coincidence."

Brown and Batygin's hypothesis has been accepted by luminaries such as Jim Green, director of NASA's Planetary Science Division. Skeptics of the proposal have slowly quieted, as alternatives to Planet Nine's existence continue to be disproven. The object's extreme distance from Earth (1000 AU, or around 100 billion miles away) makes observation tricky, but the astronomical community hopes to confirm its existence by 2019.