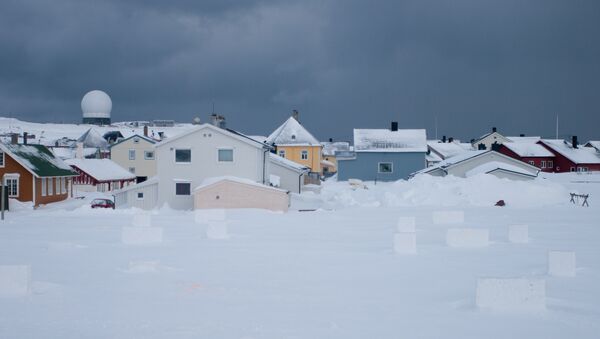 Norway, which has for years opposed NATO's controversial missile defense in Europe, seems to have changed its tune and is seriously considering joining in. In early January, an expert group of researchers from the Norwegian and the US Armed Forces was formed to advise the Norwegian government on how to proceed with this fraught issue.

Nobody Here But 'US': Oslo Aims to Outsource National Defense
Norway has currently no missiles that could make up the US-led missile defense. However, this is not a prerequisite for joining the system. Neither did Denmark, which in 2014 committed itself to the missile defense, have such missiles. Instead, the Danes are working to equip their frigates with advanced radar systems to help detect and track targets within the framework of the missile defense.

Norway may, in line with Denmark, contribute with a number of radars and sensors to the missile shield such the Globus II radar in Vardø or the Aegis radar system currently installed on five Norwegian frigates, Norwegian newspaper Klassekampen wrote.

According to Ståle Ulriksen, a researcher from the Norwegian Naval Academy, Norway can quickly become part of the NATO missile shield provided the necessary upgrades of its radar capacity take place. However, joining NATO's missile shield may be a poor prioritization for Norway, Ulriksen warned.

"In this case, we will be forced to rotate vessels to all these tasks. Then we will become limited in our overall capacity. A stake in the missile defense will weaken us in other areas. Today the Navy operates on a limited amount of funding and may be forced to give up money or manpower to comply with this task," Ulriksen told Klassekampen.

US Drills Fending Off Russian 'Hybrid War' in Norwegian Cold
According to Sverre Lodgaard, former director of the Norwegian Institute of International Affairs (NUPI), the US missile shield has had a weak justification from the very start.

"After the nuclear agreement with Iran in 2015, the rationale changed. NATO believes there is still the need for a missile defense shield, but says it is not directed towards the Middle East any longer. It is nevertheless a fact that the US missile defense program has created a lot of concern for Russia and China," Sverre Lodgaard told Klassekampen. "The investments are large, and nobody knows what they are up to," he added.

Over the past 15 years, Norway has gone from protester against the missile shield to a keen supporter of NATO's plans. Ironically, NATO Secretary General Jens Stoltenberg himself expressed skepticism over the US missile defense during his trip to Moscow in 2007 in the capacity of Norwegian Prime Minister, a move for which he was lambasted in the Norwegian media for "showing weakness against the Russians."

According to Sverre Lodgaard, Norway's participation in the missile defense will be a continuation of the current trend of shedding self-imposed limitations. He also noted that the transition was smooth and went almost without debate.

US, UK Troops to Tickle Russian Bear From Northernmost Norway
His fellow NUPI researcher, and expert on Russia, Julie Wilhelmsen, Norway's approach to defense is marked by the notion that Norway is a small country that is dependent on the US for protection, which is deeply unfortunate as it sometimes leads to indiscriminate measures to obtain 'guarantees.'

According to Wilhelmsen, Norwegian participation in the NATO missile shield, would be a big step from the balance policy and in the direction of the US and NATO. At worst, it can end in an armed conflict, she warned.

"A contribution to the missile defense will be seen as part of the trend in which Norway is no longer a land of balance between east and west, but rather an aggressive US ally," Julie Wilhelmsen told Klassekampen.

Ten-Hut! Norway All Set to Become US Watchdog in the North
Wilhelmsen stressed Russian concerns that the missile defense can easily be turned into an offensive weapon and underlined that they get stronger the further north the missile defense extends. According to Wilhelmsen, joining NATO's missile shield would thus be a bad idea in the current circumstances.

"We're inside a rearmament spiral that can simply spill over into a military conflict. Currently, it is expressed in exercises and a military build-up, but it can easily end in clashes if we continue along these lines instead of finding points of contact," Wilhelmsen said.

The defense analysis is being prepared by scientists from the Norwegian Defense Research Establishment (FFI) and the US Missile Defense Agency (MDA). Thus, Norway may become part of NATO's missile defense within a year.