US Justice Department to Review FBI, DOJ Actions Leading Up to 2016 Election 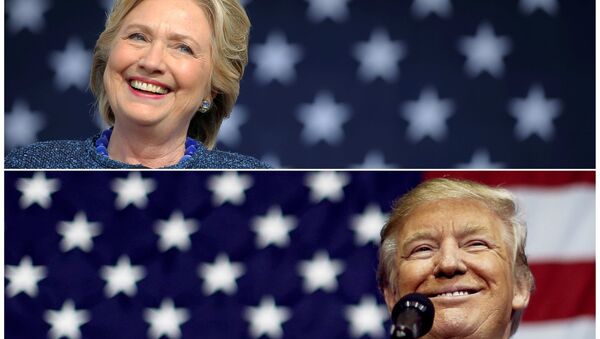 © REUTERS / Jonathan Erns
Subscribe
The Justice Department Inspector General has launched a review of the actions of the Federal Bureau of Investigations and Department of Justice leading up to the 2016 presidential election.

Inspector General Michael E. Horowitz announced the investigation on Thursday, “in response to requests from numerous Chairmen and Ranking Members of Congressional oversight committees, various organizations, and members of the public." The review will be focused on the investigation into Hillary Clinton's private email server.

The office will be reviewing “allegations that the Department or FBI policies or procedures were not followed in connection with, or in actions leading up to or related to, the FBI director’s public announcement on July 5, 2016, and the director’s letter to Congress on October 28 and November 6, 2016, and that certain underlying investigative decisions were based on improper considerations,” according to their statement.

According to the announcement, the office will also be looking into whether or not FBI Director James Comey "should have been recused from investigating certain matters."

Horowitz will also be looking into allegations that the Department’s Assistant Attorney General for Legislative Affairs, Peter J. Kadzik, improperly disclosed non-public information to the Clinton campaign — and if they should have also been recused. The review will also look at other unnamed DOJ and FBI employees who are also accused of leaking non-public information.

Additionally, the announcement states that the office will review the timing of certain Freedom of Information Act releases by the FBI on October 30 and November 1, 2016. There are allegations about the use of an official Twitter account to publicize the releases also being “influenced by improper considerations.”

The FBI will work with the office during the probe, Comey said in a statement on Thursday afternoon.

"I am grateful to the Department of Justice’s IG for taking on this review," the statement read. "The FBI will cooperate fully with him and his office."

000000
Popular comments
Obama is revealing his complete lack of ethics. Obama is showing that he never belonged in that position. Wow, talk about not having the proper temperament for the position, Obama is the example of having the wrong people in positions of power. Now Obama is inciting violence at the inauguration, bizarre and unprecedented.
jas
12 January 2017, 22:54 GMT2
000000
How can they have a complete investigation and come to valid conclusions by next Thursday, when Monday is a federal holiday? That's 3 days. 4 counting this Friday, but everyone knows DC work 1/2 a day if any on a holiday weekend. Nobody's doing much tomorrow on it.
jas
13 January 2017, 01:25 GMT1
000000
Newsfeed
0
New firstOld first
loader
LIVE
Заголовок открываемого материала
Access to the chat has been blocked for violating the rules . You will be able to participate again through:∞. If you do not agree with the blocking, please use the feedback form
The discussion is closed. You can participate in the discussion within 24 hours after the publication of the article.
To participate in the discussion
log in or register
loader
Chats
Заголовок открываемого материала
Worldwide
InternationalEnglishEnglishMundoEspañolSpanish
Europe
DeutschlandDeutschGermanFranceFrançaisFrenchΕλλάδαΕλληνικάGreekItaliaItalianoItalianČeská republikaČeštinaCzechPolskaPolskiPolishСрбиjаСрпскиSerbianLatvijaLatviešuLatvianLietuvaLietuviųLithuanianMoldovaMoldoveneascăMoldavianБеларусьБеларускiBelarusian
Transcaucasia
ԱրմենիաՀայերենArmenianАҧсныАҧсышәалаAbkhazХуссар ИрыстонИронауОssetianსაქართველოქართულიGeorgianAzərbaycanАzərbaycancaAzerbaijani
Middle East
Sputnik عربيArabicArabicTürkiyeTürkçeTurkishSputnik ایرانPersianPersianSputnik افغانستانDariDari
Central Asia
ҚазақстанҚазақ тіліKazakhКыргызстанКыргызчаKyrgyzOʻzbekistonЎзбекчаUzbekТоҷикистонТоҷикӣTajik
East & Southeast Asia
Việt NamTiếng ViệtVietnamese日本日本語Japanese俄罗斯卫星通讯社中文（简体）Chinese (simplified)俄罗斯卫星通讯社中文（繁体）Chinese (traditional)
South America
BrasilPortuguêsPortuguese
NewsfeedBreaking
09:18 GMTZuckerberg Reportedly Approved Using News Feed to Push Pro-Facebook Coverage in Image-Reshaping Bid
08:59 GMTPakistan Wants to Help Train Afghan Security Forces, Ambassador Says
08:52 GMTMadhya Pradesh Couple, Young Girl Forced to Dance With Bike Tyres Around Their Necks For Elopement
08:52 GMT2,500 Rhino Horns Torched in Indian State of Assam to Convey Anti-Poaching Message
08:23 GMTNo More Coal-Fired Plants Built by China Abroad, Xi Jinping Announces
08:22 GMTUkraine's Internal Affairs Ministry Says Shots Fired at Car of Zelenskyy's Aide Shefir
08:07 GMTRivers of Molten Lava Flow Towards Ocean as La Palma Volcano Continues to Erupt
08:03 GMTIran Offers India Joint Commission on Afghanistan, Wants 'Preferential' Trade Pact to Be Finalised
08:00 GMTSenior US Army Official Says Russia ‘Primary Military Threat to Homeland’
07:59 GMTIndia's Modi Calls His Visit to US Opportunity to Strengthen Ties Between Countries
07:47 GMTMoscow Refutes Polish Claims About Nord Stream 2 Impact on Gas Price Spike, Source Says
07:40 GMT'Thousands' of Haitian Migrants Reportedly Released in US, Undercutting Biden Admin's Expulsion Vows
07:35 GMTIndia: Traders in BJP Stronghold Go on Strike as Big Retailers Enter Jammu and Kashmir
07:08 GMTBoris Johnson Calls Joe Biden a 'Living Deity'
07:00 GMTManager, Not Players, Is the Difference at the Top of Premier League
06:54 GMTPortugal Wants to Cooperate With Russia on Economic Crises, COVID-19, Refugees, President Says
06:53 GMTFinland's Burglaries Drop 40 Percent Amid COVID-19 Pandemic
06:41 GMTNumber of People Injured in Russia's Perm University Shooting Climbs to 43, Health Ministry Says
06:30 GMTUN Chief Guterres Got Letter From Taliban Requesting to Join 76th Session of General Assembly
06:27 GMTEgypt Condemns Failed Coup Attempt in Sudan, Backs Transitional Government