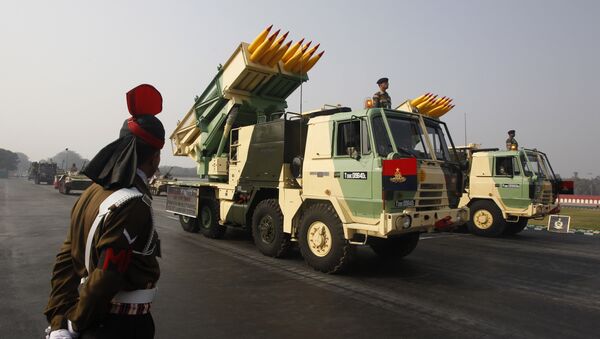 "Guided Pinaka was successfully test-fired from Launch Complex-III, ITR, Chandipur. The Pinaka Rocket Mark-II, which evolved from Pinaka Mark-I is equipped with a navigation, guidance and control kit and has been transformed to a Guided Pinaka. This conversion has considerably enhanced the range and accuracy of Pinaka," read a statement released by India's Ministry of Defense.

Pinaka is used as an area destruction weapon that can virtually decimate 900 sq m of area up to 65 kms away. "It gives a tremendous boost to the capability of the armed forces once it goes into production. So why do we need to get worried about technology being US engineered?" Manohar Parrikar, India's Minister of Defense said after the successful trial.

Turbulence in South China Sea: India Offers Missile to Vietnam
It will gradually replace SMERCH which, according to its Russian meaning ``whirlwind'', can flatten an area of 1.1 sq km.

Indian Army intends to have 22 Pinaka regiments by 2026 including 12 regiments of Guided Pinaka. Each regiment consists of three batteries of six Pinaka launchers mounted on Tatra trucks.

Indian Army has 62 SMERCH batteries which provide lethal support to infantry and tanks to launch attacks.