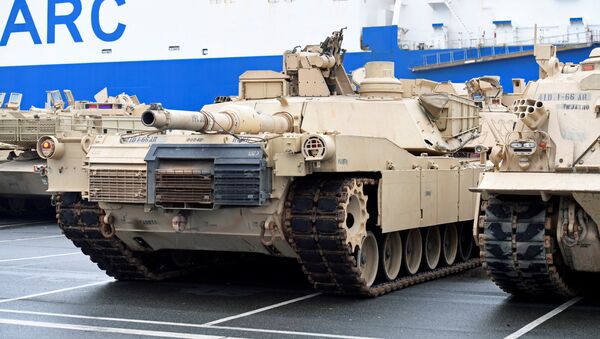 The US army's recent deployment to Eastern Europe via the north German port of Bremerhaven, the largest shipment of military equipment from the US to Europe since the Cold War, is a financial, legal and political burden on Germany, retired German Army Lieutenant Colonel Jochen Scholz told Sputnik.

US Army Deploys Thousands of Troops and Dozens of Tanks to Eastern Europe
Last week the US army began the deployment of 4,000 troops and 87 tanks and other military equipment to Eastern Europe as part of its Atlantic Resolve operation, launched in April 2014 in the aftermath of the US-backed Maidan coup d'etat in Ukraine.

Jochen Scholz, a retired Lieutenant Colonel in the German Bundeswehr who has also worked within NATO and the German Defense Ministry, told Sputnik Deutschland that while such a small contingent of troops is not enough to start a war, the soldiers' presence in Germany is problematic for other reasons.

"It depends what you want to do. This is a brigade, a third of a division, it can't lead to war. The decisive point from a German perspective is that the whole thing is not within the framework of NATO. It is a bilateral agreement between Poland and the United States. There are already questions about the legal basis of the logistical help that Germany is giving here. The entire Bundeswehr army base which is responsible for logistics was involved. That all has to be paid for and you can imagine who is bearing the costs."

American tanks and other military equipment were shipped to the German port of Bremenhaven, before they was transported by rail to Poland to be distributed across the Baltic states, Bulgaria and Romania. Altogether around 2,500 military vehicles arrived in Bremenhaven on three freight ships.

NATO's Efforts to Increase Pressure on Russia to Prove Futile
They were greeted by anti-war protesters holding placards with slogans such as "Army go home," Germany's NDR news reported.

Protests against the arrival of the US weaponry were "local to Bremerhaven," Scholz said.

Scholz said that the US deployment to Europe is reminiscent of the situation during the Cold War, when the US viewed Germany as a potential hub for a US attack or defensive war with the Soviet Union.

"That was the situation during the Cold War. The plan was that in the event of war up to 900,000 soldiers could be deployed to Europe via Frankfurt Airport. The US bases in Europe could be used as a springboard if there was a bigger conflict. Here, too, a question arises about the legal basis on which the United States operates bases in Europe. The NATO Treaty serves as the legal basis for the deployment of these forces. But everything that goes beyond that, such as the projection of US power from here to other parts of the world is not consistent with the deployment contracts."

The US troops on the Atlantic Resolve mission are deployed on a nine-month rotation, which means that soldiers and equipment may arrive in the north German port quite frequently.

"If you assume that Germany is willing to offer its services as a hub, then you can see that coming. (However,) a legitimate question is, 'why isn't the whole thing being sorted out in Gdansk?'"

World
The Real Plan Behind the US Decision to Supply Arms to Syrian Rebels
Scholz said that the outgoing Obama administration wanted to achieve several political objectives when they ordered what is the largest transfer of military equipment from the US to Europe since the end of the Cold War.

"I see this whole action from several points of view. Firstly, the Obama administration and Defense Secretary Ashton Carter are trying to put another stumbling block in the way of the incoming President. Secondly, the German and European public are to be shown how dangerous Russia is and how it is a threat to neighboring countries such as the Baltic states. The third point is that such actions are used to convince the public to spend more on the military."

"And depending on how the Russia responds to this deployment, maybe there will be a fourth argument, which says, 'you see, we are only defending the Baltics, but the Russians have immediately reacted and are building offensive forces here,'" Scholz said.

"They know very well that Russia is not planning that (an invasion of the Baltics). This is part of the game. You imagine a threat that does not exist in order to justify more military presence and defense spending."