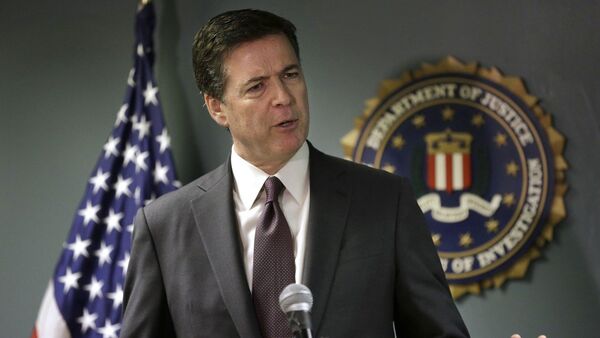 © East News / AP Photo/Steven Senne
Subscribe
International
India
Africa
FBI Director James Comey said that FBI will work with the Department of Justice Office of Inspector General during the probe of the actions taken by the agency before the 2016 presidential election.

WASHINGTON (Sputnik) — The US Federal Bureau of Investigation (FBI) will work with the Department of Justice Inspector General (IG) during the probe of actions taken by the agency before the 2016 presidential election, FBI Director James Comey said in a statement.

"I am grateful to the Department of Justice’s IG for taking on this review," Comey stated on Thursday. "The FBI will cooperate fully with him and his office."

Within a two-week period leading up to the election, Comey wrote two letters to Congress on the probe of Democratic presidential nominee Hillary Clinton’s private email, which led to days of news coverage that reportedly damaged her bid for the US presidency.

Comey said in the statement "everyone will benefit" from transparency regarding the events that transpired prior to the presidential election.

Anti-Logic: FBI Blind to DNC Servers Before Accusing Russia of Cyberattack
Clinton used a private server for official business during her tenure as secretary of state from 2009 to 2013 contrary to US regulations and established practice.

Moreover, Clinton erased more than 33,000 of her emails after receiving a subpoena to submit them, while her closest associates destroyed at least 13 blackberry and related devices used to communicate with Clinton.

The FBI conducted a criminal investigation into whether Clinton intended to violate US laws, but it closed it and then reopened it again on account of new evidence just days before the November 8 election. In both instances, Comey recommended that the Justice Department does not criminally charge Clinton.