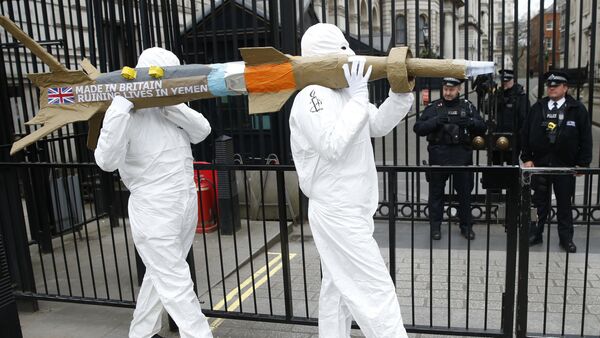 The UK Foreign Office has been accused of breaking ministerial codes over the Saudi use of British-made weapons in Yemen, with UK officials taking nearly one month to correct false assurances that Riyadh hadn't breach international humanitarian law (IHL).

The release of internal government emails showed that ministers were informed that they had misled parliament on four occasions, after officials claimed the government had made an assessment on whether British-made weapons were being used to breach IHL as part of the Saudi Arabia's military campaign in Yemen.

Despite these assurances, ministers had no made such an assessment, but had merely assessed whether there was a general risk that Saudi Arabia had breached IHL.

.@SDoughtyMP asks about compliance with the Ministerial code in relation to information given to Parliament on Yemen

​The email chain revealed that it took 23 days to admit the error after then-Foreign Secretary Philip Hammond was informed on June 28, 2016.

The admission was not made until July 21 — the last day of parliament before the summer recess — and was done so by new Foreign Secretary Boris Johnson.

Former Labour party foreign spokesperson Hilary Benn wrote to Prime Minister Theresa May, urging her to investigate whether ministerial codes had been breached.

He described the delays in telling parliament as "extended and unacceptable," arguing that ministers were required to correct errors "at the earliest opportunity" and that major announcements should not be left to the last day of parliament.

Benn said there was a "flurry" of email activity until July 5, then a "large gap in exchanges" until the correction was tabled to parliament on July 21.

See my letter to the PM asking her to investigate possible breaches of the ministerial code over inaccurate parliamentary answers on Yemen. pic.twitter.com/J7H3Dcd03G

​According to the internal email exchange, Hammond had agreed to the corrections and changes over the Saudi issue, but it said "there was not time to implement the changes before he left office."

The final email sent to the foreign secretary stated: "In the answers it was implied that HMG [the government] had made assessment of whether the Saudi-led coalition had breached IHL in Yemen. It is important to make clear neither the FCO or MoD reaches a conclusion as to whether or not [a breach of] an IHL has taken place in relation to each and every incident of potential concern that comes to its attention. We are not making an assessment whether or not a sovereign state has or has not acted in breach of IHL, but we are acting to make an overall judgment."

The latest developments have once again raised questions over the UK's relationship with Saudi Arabia, particularly in regards to the continued sale of arms to the Gulf kingdom.

The government is facing legal action from the London-based Campaign Against Arms Trade (CAAT), who have launched a judicial review in the UK High Court, arguing that British officials should not have licensed arms exports to Saudi Arabia given the alleged IHL breaches in Yemen.

Saudi Arabia should immediately dispose of all the UK-manufactured cluster munitions it holds after it admitted using them in Yemen. pic.twitter.com/172FpY7Ida

​Riyadh has been accused of numerous breaches of IHL during its Yemen campaign, with Saudi forces accused of targeting civilians sites such as schools, hospitals and houses, as well as destroying key infrastructure as part of its aerial campaign.