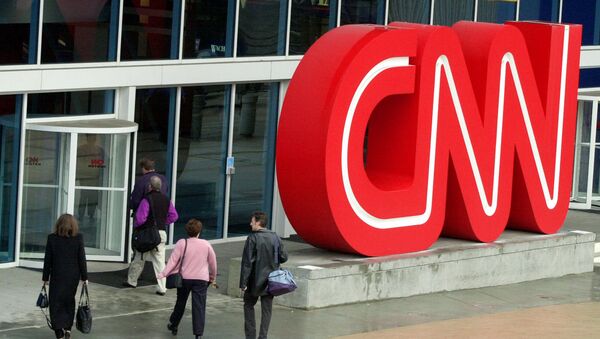 © AP Photo / Ric Feld,File
Subscribe
International
India
Africa
On Wednesday at the Trump Tower the soon-to-be President of the United States confirmed what many journalists, citizens, and fact-checkers have long suspected: CNN is fake news.

"I’m not going to give you a question. You are fake news," Trump said while pointing his index finger squarely at CNN senior White House correspondent Jim Acosta.  The CNN reporter admirably tried to get Trump to answer a question but was scolded almost as if a parent were teaching his children manners. "Quiet, quiet, don’t be rude, let the woman ask her question" Trump said, referring to another reporter.

On Tuesday, CNN fueled rumors of #GolddenShowerGate, which was trending on Twitter Wednesday morning. The network that markets itself as centrist relief from hyper-partisan outlets Fox and MSNBC aired an uncorroborated, unverified report alleging that Russians had obtained compromising information on Trump. The details of the dossier, widely disseminated by BuzzFeed, accused Trump of hiring prostitutes at the presidential suite of the Ritz Carlton Hotel in Moscow where paid escorts made it rain with urine, otherwise known as a "golden shower." The report originated from a former UK intelligence operative, according to CNN and BuzzFeed, the first outlets to publicize the reports. Business as usual?

Following the national and global embarrassment, CNN desperately tried to distance itself from BuzzFeed. Since CNN posts are "carefully sourced reporting," the network’s content is "vastly different" from BuzzFeed’s "unsubstantiated" memos, according to a statement. CNN claims their reporting of Russia potentially having compromising financial or personal information against Trump is part of its honorable First Amendment duty of "informing the people of the inner workings of their government."

The Washington Post has spearheaded the "fake news" witch hunt but even Jeff Bezos’ news outlet did not fall for the unsubstantiated rumors, which CNN and BuzzFeed would have viewers think was a factual report. Mainstream beltway-insider publications like Washington Post and Politico berated the reporting this morning. According to the Post, "several news organizations, including The Washington Post, have been attempting to confirm many of the specific allegations without success." What’s more, the combined efforts of more than half-a-dozen journalists at Politico to gather evidence for the allegations "got nowhere."