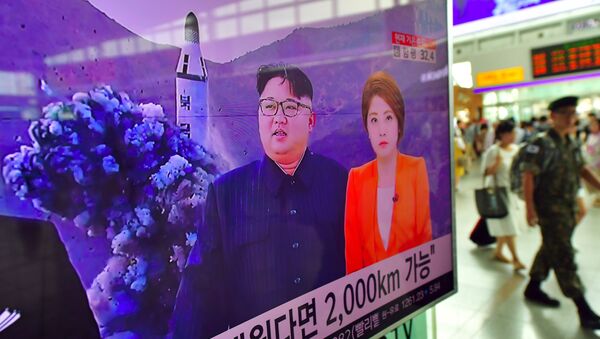 © AFP 2023 / JUNG YEON-JE
Subscribe
International
India
Africa
South Korean Defense Ministry said that North Korea is not yet capable of launching intercontinental ballistic missiles but has boosted its nuclear potential over the past two years.

South Korea Rejects Joint Drills With US, Japan Aimed at Countering North Korea
TOKYO (Sputnik) – North Korea is not yet capable of launching intercontinental ballistic missiles (ICBM) but has boosted its nuclear potential over the past two years, the South Korean Defense Ministry said Wednesday.

"The North has not mastered ICBM-related technologies yet and it is in the midst of completing the flight capabilities of an SLBM [submarine-launched ballistic missile]," a defense official said, as quoted by the Yonhap news agency.

The comment comes after the release of the ministry's biennial defense white paper for 2016 which includes a section assessing the military strength of South Korea's northern neighbor.

The analysis contrasts with assumptions made in the 2014 paper, in which Seoul said the north may have sufficient capabilities for creating an ICBM.

North Korea has, however, boosted its nuclear capabilities since 2014. Pyongyang now has some 50 kilograms (110 pounds) of weapons-grade plutonium, compared to 40 kilograms in 2014, according to the white paper.

The amount is sufficient to make 10 nuclear warheads, the ministry estimated, noting that the north has also improved uranium enrichment technologies and has miniaturized its warhead design.

The paper comes amid rising tensions on the Korean peninsula. On September 5, 2016, Pyongyang launched three ballistic missiles in the direction of the Sea of Japan. Several days later it conducted a successful test of a nuclear warhead, which is believed to be the fifth and largest blast since Pyongyang began pursuing nuclear and ballistic missile programs. In the latest New Year's address to the nation, North Korean leader Kim Jong Un said the country was finalizing preparations for another intercontinental ballistic missile test.

On Sunday, the North Korean Foreign Ministry said the country was ready to launch a ballistic missile at any time and from any location. On the same day, former minister at the North Korean embassy in London Thae Yong-ho, who defected to South Korea in 2016, stated that North Korea seeks to complete the development of an ICBM by the end of 2017 or in early 2018.