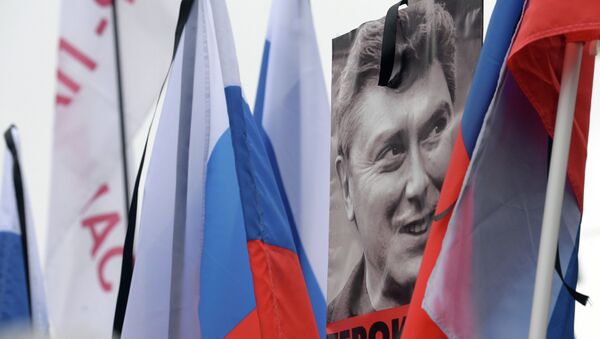 © Sputnik / Kirill Kallinikov
/
Go to the photo bank
Subscribe
The Kremlin spokesman said that both perpetrators and those who stood behind them must be brought to justice and punished accordingly.

MOSCOW (Sputnik) — The investigation of such complex criminal cases as the murder of Russian politician Boris Nemtsov can last for years but they must be solved sooner or later, bringing perpetrators to justice, Kremlin spokesman Dmitry Peskov said Wednesday.

“The only thing I can say is to remind you the words, repeatedly uttered by [Russian] President [Vladimir Putin] that such cases [as the murder of Nemtsov] are extremely complex and their investigation can last for years. But, at the same time, of course, the president proceeds from the fact that every such crime, which poses a challenge for the entire society and which has been strongly condemned by the president, must be solved sooner or later,” Peskov told journalists.

He added that both perpetrators and those who stood behind them must be brought to justice and punished accordingly.