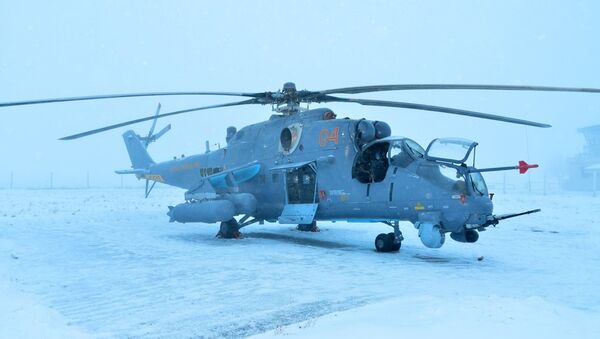 Russia to Supply 12 Mi-35M Helicopters to Nigeria by 2018
MOSCOW (Sputnik) — The Russian Helicopters holding, part of the Rostec state corporation, will deliver four Mil Mi-35M attack helicopters to Kazakhstan in 2018 under a deal signed with the country's Defense Ministry, the manufacturer said Wednesday.

"The Russian Helicopters holding, in partnership with [Russia's state arms exporter] Rosoboronexport, will deliver four Mi-35M attack helicopters with transport capability to Kazakhstan's Defense Ministry in 2018. The contract has been signed," the company's press service said.

The holding said the helicopters would be paid for in Russian currency, which underscored the strategic nature of the two countries' relationship.

"The Mi-35M helicopter is slowly advancing to replace the Mi-24 helicopter used widely around the world," Vladislav Savelyev, the company's director of public procurement and military-technical cooperation, said as quoted by the press service.

Russia Plans to Sell Over 120 Mi-28NE, Mi-35M Helicopters in 2016-2018
According to Savelyev, the Mi-35M helicopters, with their enhanced performance, are more multifunctional than the older Mi-24, as they can be used at any time of the day and in any weather conditions.

The Russian Helicopters is one of the global leaders in helicopter construction. It is the only helicopter manufacturer based in Russia, which comprises five factories, two design bureaus, as well as enterprises for the manufacture and maintenance of spare parts, and a service company, responsible for the after-sales maintenance in Russia and abroad.