Over 173,000 Iraqi Refugees Have Fled Daesh-Occupied Regions Since October 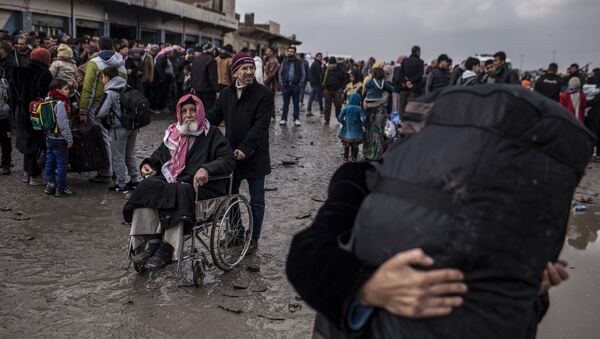 The number of Iraqi refugees who have fled the capital of Nineveh province Mosul and the Hawija in Kitkuk province since October has reached 173,584, which is an increase from the 169,999 refugees declared just two months prior, local media reported Tuesday.

Iraqi Forces Pause Mosul Offensive to Refit for Further Advance - Task Force
MOSCOW (Sputnik) – The displaced refugees have been placed in refugee camps across the Nineveh, Kirkuk, Salahuddin, Erbil, and Dohuk provinces, the Iraq’s Ministry of Migration and Displacement said as cited by the IraqiNews online newspaper.

The operation to liberate Mosul from Daesh terrorists, outlawed in many countries, including Russia, began on October 17, 2016. Iraqi troops managed to advance in the eastern part of the city, but the western part — on the right bank of the Tigris River — remained under militant control.