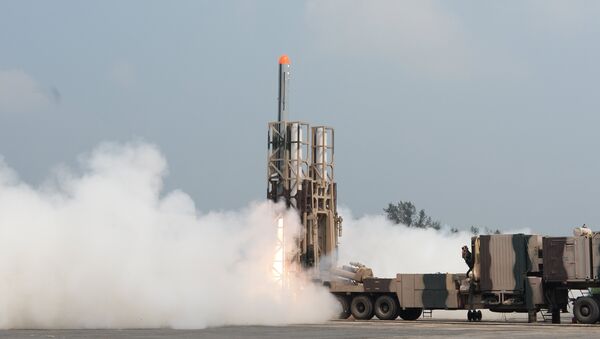 © Photo : DRDO
Subscribe
India’s Nirbhay cruise missile, the equivalent of the Pentagon’s Tomahawk Land Attack Missile, has been granted a 16-month development extension, despite failing in tests for a fourth time.

A Defense Ministry official told Defense News, "After a review of the Nirbhay program last week, defense minister gave further time till June 2018 to allow Defence Research and Development Organization (DRDO) to do their best on the program." Some analysts believe that technical issues will delay the Nirbhay program beyond the extension.

An unnamed DRDO scientist said that the December 21 test failure happened "because the engine lost its thrust minutes after takeoff and the flight control system and other software failed as well."

The scientist added that the cruise missile faced complications "with TERCOM, or terrain contour mapping. It tends to rise up periodically while following the predetermined route. It could be that the radar altimeter and the computer are not talking on a regular basis…Stability of the flight over long range has been the main problem."

Soon after launching from the Integrated Test Range off the Odisha coast at Balasore, the missile had to be destroyed in mid-air when it veered dangerously from its flight path, near the Bay of Bengal coast.

A DRDO employee told the Times of India at the time that, "The test was an utter failure, with the missile veering to the right within two minutes of takeoff."

Agency officials explained, "The engine in Nirbhay’s first stage started working well. The missile rose from the launcher. But it did not follow the required flight path. It started veering dangerously towards one side in about a minute and a half after the lift-off," according to the Hindu.

The DRDO’s Aeronautical Development Establishment laboratory has been developing the Nirbhay since 2004. The two-stage subsonic cruise missile can carry a nuclear warhead and has a range of 1,000 kilometers. Meant to enter service in 2016, unsuccessful tests have kept the Nirbhay in the development stage.

Defense analyst and retired Indian Army major Bhupinder Yadav suggested that the DRDO’s projects should go up for review, saying, "In our context, most of the DRDO projects are similar exercises to reinvent the wheel over stretched timelines and resources. It is time someone questions the logic in continuation and decides to put a break to non-performing public monopolies and seek alternatives."

Yadav added that the Nirbhay’s development is important, given the missile capabilities of Pakistan and China. He said, "India has ballistic and tactical missiles of different capacity, but not land-attack cruise missiles [to counter] Pakistan and China, that have such systems with range varying from 400-1,500 kilometers, respectively."

An Indian Army official suggested that New Delhi press ahead with the Nirbhay’s development. "Turbofan technology, which still has not been mastered, needs to be refined by India and used for this missile successfully. If we could develop the cryogenic technology for [a] Geostationary [Satellite] Launch Vehicle, then we certainly can master this turbofan technology also, given some more time," it was reported.

The Nirbhay can be launched from land, sea, or air platforms, and carry nearly two dozen warheads. The missile can also carry a nuclear payload, reaching a target by flying at tree-top level.