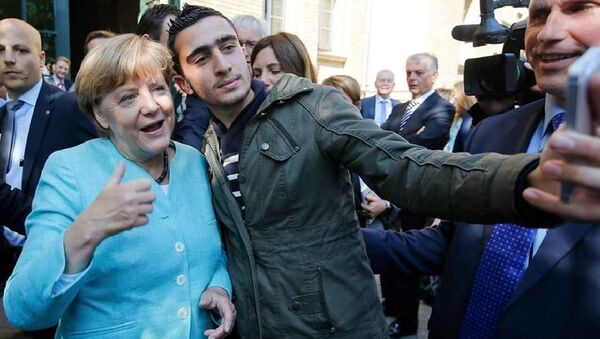 © Photo : Facebook/Anas Modamani
Subscribe
A lawyer in Bavaria has launched legal action against Facebook on behalf of a Syrian refugee who took a a selfie with Angela Merkel, after the social network failed to remove false news stories about him.

‘All Terrorists Are Muslims’ Facebook Post Gets Finnish Lawmaker Fined
In September 2015, when he was 18 years old, Anas Modamani from the Syrian capital Damascus took a selfie with the German Chancellor outside the Spandau refugee center in the Berlin. The resulting photograph went viral, and made him the most famous refugee in Germany.

However, the photograph was also the subject of another viral story six months later, with negative consequences for Modamani.

His passing resemblance to Najim Laachraoui, a Moroccan-born terrorist who was one of two suicide bombers to attack Brussels Airport in March 2016, led internet rumors to circulate on social networks that Laachraoui, not Modamani, had taken the selfie with Merkel.

​Shortly afterwards the rumor was disproved, and Modamani's identity revealed. However, stories about Modamani have continued to circulate on Facebook.

Most recently it has been falsely claimed that Modamani was one of a gang of seven migrants who set alight a homeless man sleeping in the Berlin subway in the early hours of December 25.

German Police, Media Slam Fake Breitbart Story about Migrant Mob Burning Church
Despite the fact that all seven of the perpetrators have been identified, and Modamani is not among them, the story has continued to circulate on Facebook.

The social network is now facing legal action as a result of its failure to remove the two stories.

Chan-jo Jun, a lawyer based in Wurzburg, Bavaria, is representing Modamani. He told Bayerischer Rundfund that the story has been shared over 500 times on Facebook, which maintains that its presence does not violate its community standards.

"For Facebook, false news and insults are not a violation of 'community standards', but they are a breach of German law," Jun said.

The lawyer, who has previously filed various other legal complaints against Facebook, added that he wants to use the case to prove that German law also applies to Facebook.

"The internet offers mobile jurisdiction, and the plaintiff can choose any court where the image was retrievable, which [includes] Würzburg as well. I have confidence in the Bavarian and above all the Würzburg legal system," Jun said.

Last year, Modamani, who has been living with a foster family in Berlin since January 2016, said he was shocked and saddened by the false rumors.

Speaking to Berlin's B.Z. newspaper in March 2016, he said he was "completely shocked" by the false claims.

"I am really sad about the behavior of the people who claim such a thing. I just want to live in peace in Berlin," Modamani added.

In an interview with the German newspaper Bild last August, the refugee also explained that it was not until later that he realized he had taken a photo with the German Chancellor, after some Syrian friends informed him.

"After that I knew that she was the German leader," he revealed.