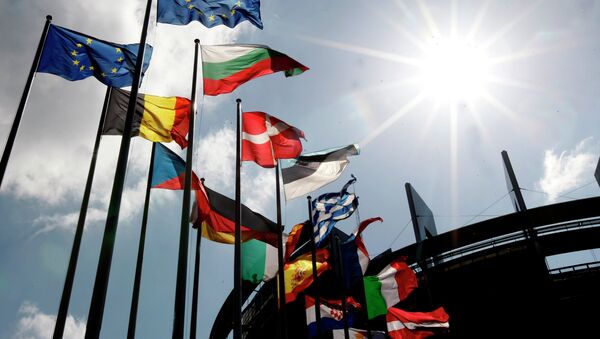 © AP Photo / Christian Lutz
Subscribe
Alain Lamassoure, a member of European Parliament, said that the authors of the report on the EU potentially financing itself were not asked to find ways to increase EU budget, but a new system could still have that result as the system of national contributions was politically holding up the increase.

Politicians Slam 'Naive' and 'Unacceptable' EU 'Black Hole' Finance Deals
MOSCOW (Sputnik) — EU institutions will not acquire more power to the detriment of bloc members if the bloc begins to finance itself instead of relying on members' contributions, Alain Lamassoure, a member of European Parliament and a co-author of the report proposing the system of own resources, said Wednesday.

According to the press service of the European Parliament, a report, prepared by the Monti Group, on the European Union potentially financing itself will be presented on Thursday.

"Of course this will be the finance ministers’ argument, but it’s an argument based on bad faith. There’s not going to be a transfer of power at all," Lamassoure said, commenting on possible fears that EU institutions would gain advantage over member states.

EU to Provide More Financial Support to Tunisia, Invest in Youth
According to Lamassoure, the authors of the report were not asked to find ways to increase EU budget, but a new system could still have that result as the system of national contributions was politically holding up the increase.

"But if you have as a basis an indirect tax, be it VAT or a carbon tax etc., the resources coming from this tax increase automatically with annual economic growth. So without making new political decisions and without increasing the relative burden for the tax payer, you will get more money," Lamassoure said.

The report argues in favor of the indirect taxation of imported goods from nations with high emissions, or the auctioning of revenue from border control, the digital single market, or energy efficiency.