Breeze: Dutch Railways to Run Its Trains on Wind Power 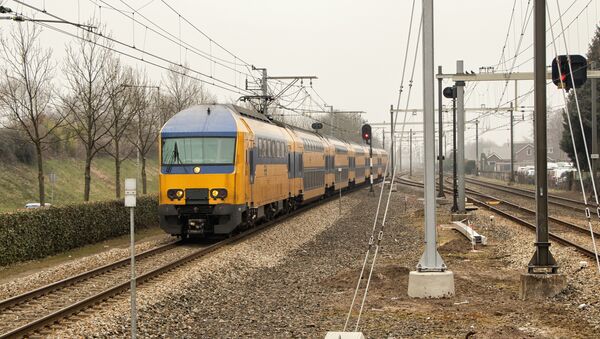 © Flickr / Roel Hemkes
Subscribe
International
India
Africa
The Netherlands are now powering all their trains with wind energy, an example for other nations to follow, they claim. However, their feat may be a bit harder to achieve elsewhere.

UK Economy Gains Momentum as Consumer Borrowing Surges Post-Brexit
Kristian Rouz – The main Dutch passenger train operator, state-owned Nederlandse Spoorwegen (NS) or Dutch Railroads, says it has achieved its goal of going 100pc renewable one year earlier than previously planned, and that all of their trains are now powered by wind energy.

At first glance this may seem like a whopping success for the environmentalist cause, but the reasons are basic enough: conventional sources of energy such as oil and coal are expensive in Europe, allowing for the windmills to remain in the black despite their low profitability, and massive governmental subsidies. The costs of transportation are, in turn, passed on to the commuters, resulting in higher inflation projections for the Netherlands.

All Dutch trains will be 100pc powered by wind energy starting this year, NS announced in a statement, which will result in less need for imported oil and coal, and higher revenues for windmill operators in the longer run.

"Since 1 January, 100% of our trains have been running on wind energy," Ton Boon, spokesman for NS, said. "So we in fact reached our goal a year earlier than planned."

Two years ago, NS offered a tender to power their trains with renewable energy. A Dutch energy company, Eneco, won the tender, and the two enterprises struck a 10-year deal, initially eyeing 1 January 2018 as the start date. By then, all trains were supposed to run on energy from renewable sources. However, the goal turned out to be within closer reach.

Big Oil Balanced Around $55/Bbl as Disinvestment Fears Wane
Eneco posted a net income of 233 mln euros in 2012 and has remained in the black ever since, extracting the lion's share of its revenues from waste processing and heating, as well as natural gas production and electric power generation. The Netherlands are an oil-producing nation; the country's energy sector operates offshore oilrigs in the North Sea, as well as windmills and other more environment-friendly energy-generating furnaces.

NS, for its part, is not a profitable enterprise, despite the relatively high cost of passenger commuting. In 2015 its net loss was 118 mln euros, and the higher costs of train tickets associated with the 100-percent renewable energy trains, might help fix the situation. Overall, Dutch energy companies operate some 2,200 wind turbines, and one windmill working for one hour can power one train to go 200 km (120 miles). Commuting distances are short in the relatively small Netherlands, and passenger traffic density is high (some 600,000 commuters daily), which allow for the windmill trains venture to experience higher profitability.

Eneco and NS say their accomplishment is "the first in the world"; marking the first time a company has powered all of its trains with nuclear energy. NS provides roughly 5,500 train trips per day. The two companies are also hoping to further reduce train energy usage by 35pc by 2020 compared to 2005.

Oil Prices Poised to Post Further Gains Amid Bullish Investor Sentiment
Eneco claims this precedent might serve as an example for other nations to follow. However, the structure of the Dutch energy market puts the renewables in a more advantageous position there. The Dutch government is aggressively expanding its network of wind turbines, even shutting down offshore oilrigs in order to boost the profitability of the renewables in order to strengthen the nation’s self-sufficiency when it comes to energy.

However, in nations with more territory and longer distances, not to mention cheaper conventional sources of energy, such as the UK and the US, the example of the Netherlands would be rather hard to follow. The expenses associated with commuting by rail sparked outrage in Britain in January 2016, when a blogger flew from Sheffield to Essex via Berlin, Germany, which proved to be cheaper than a £50 train ticket.