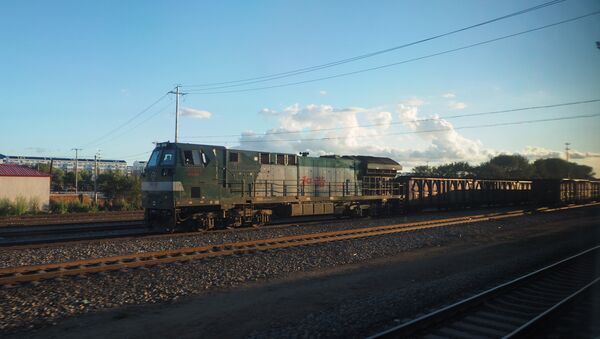 Last week, Chinese media reported that the first freight train traveling directly from coastal China to the UK had begun its journey across Eurasia. Commenting on the benefits of the new route, for China, Europe and Russia, analysts explained that it was another clear sign that fundamentally new global economic processes are at work.

Last week, Xinhua confirmed that the first freight train making its way from coastal China to London had departed from the Yiwu Railway Station in Central China's Zhejiang province. The 11,930 km route, passing through China, Kazakhstan, Russia, Belarus, Poland, Germany, Belgium and France, will take 18 days, with the train set to arrive at the Barking Rail Freight Terminal in East London later this month. The train will take the Channel Tunnel between France and the UK.

East Meets West With New China-UK Rail Freight Route
The train, filled with clothing, bags and other Chinese consumer goods worth about $4.9 million US, is the first in what is expected to become a weekly service.

Russian observers were happy to discover that their country became one of the nations along the new route, following months and years of speculation that China's New Silk Road project would bypass Russian territory in favor of other routes through the Middle East, Turkey or the Indian and Mediterranean seas.

Russian business magazine Expert explained that the new route is 'good news' for Moscow, not just from the strategic perspective, but also given the prospect of new income for the state budget provided via this new route between Asia and Europe.

"The focus on railway service is understandable," Expert added, "given that the delivery of goods by rail is much cheaper than air transport, and faster than by water."

Furthermore, the magazine noted, the Maritime Silk Road, which passes far south of Russia and exists as a positive alternative to land-based options, is facing conditions of record low levels in maritime trade, according to the Baltic Dry Index. "The first train traveling from China to London along the Russian Trans-Siberian Railway demonstrates that new economic processes have begun," Expert suggested.

Global Trade Initiatives Shift East as World Economy Slows
China Railway Corporation is the operator of the new ultra-long distance route. The UK becomes the eighth foreign final destination among its routes, with the city of London becoming the 15th final destination city. The operator's other European destinations include Madrid and Hamburg.

The Yiwu-London route was announced in late 2013 by President Xi Jinping, as part of China's ambitious 'One Belt, One Road' project, which includes countries across Eurasia, the Middle East and Africa.

The new freight route is the first in a series of prospective projects being actively considered by European and Asian economies for trans-Eurasian travel and carriage using Russia in their routes. Officials in Japan are now actively discussing the possibility of building a new 9,600 km Trans-Siberian rail link which would allow passengers to travel from Tokyo to London and back via high-speed rail. The massive project would run along the Trans-Siberian Railway for most of its route, but would run along Sakhalin Island in Russia's Far East. Sakhalin would be connected to mainland Russia and to Japan via large tunnels or bridges, first from Hokkaido (requiring a 42 km connection) and then via Khabarovsk (requiring a 6 km bridge or tunnel).