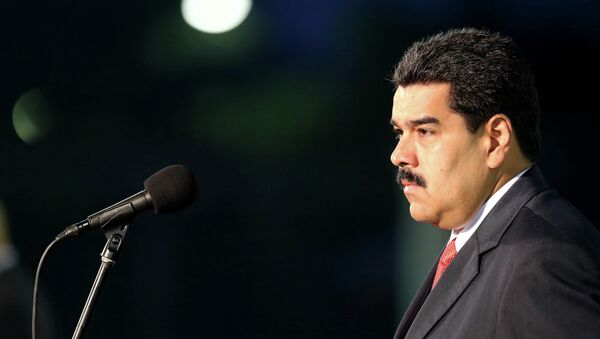 © AP Photo / Ariana Cubillos
Subscribe
The Venezuelan parliament declared earlier Monday that Venezuela's President Nicolas Maduro abandoned his post as result of dereliction of duty, local media reported. Sputnik Mundo discussed the issue with Argentinian journalist Pedro Brieger, who said that this is another attempt of the opposition to overthrow a pro-Chavez leader in the country.

The opposition-led Venezuelan Parliament earlier stated that Maduro had repeatedly acted contrary to the country's constitution and caused an economic crisis in the country. The state's Supreme Court, however, ruled that the parliament does not have the authority to dismiss President Nicolas Maduro from office.

"The opposition in Venezuela controls the National Assembly and wants to do to President Nicolas Maduro what they tried to do Hugo Chavez," director of the Nodal news portal told Sputnik Mundo.

Venezuelan Parliament Says President Maduro Abandoned Post
Brieger believes that the behavior of the opposition is another example of the processes that started in Venezuela a long time ago.

According to the journalist, the opposition has repeatedly tried to overthrow all pro-Chavez leaders, but failed. In 2002, they organized a coup attempt against the then country's leader Ugo Chavez, which was unsuccessful.

"When they [the opposition] received majority in the National Assembly at the beginning of 2016, they decided that Chavism was over," the journalist said.

However, Chavism has had a "very strong" social base with a great potential for mobilization, which is why the elimination of the political movement is impossible, Brieger argued.

"The opposition wants to destroy Chavism as a political movement. This goal is based both on the institutional means and mobilization. But the fact is they [the opposition] do not constitute a majority in the country," he stated.

On October 25, 2016, the opposition-led National Assembly of Venezuela voted for initiating impeachment proceedings against Maduro and ordered him to appear at a Congressional session on November 1. The parliament's resolution mentioned the president's "criminal and political liability and neglect of office."

However, the Venezuelan government dismissed the move, since impeachment is not stipulated by the country's constitution as a legal procedure. On November 1, the parliament suspended the impeachment proceedings.