Russian Aerospace Forces Carried Out Over 71,000 Strikes on Terrorists in Syria 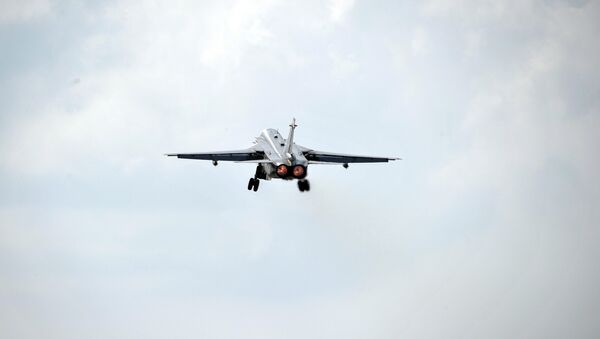 © Sputnik / Dmitriy Vinogradov
/
Go to the photo bank
Subscribe
Russian Aerospace Forces carried out over 19,000 sorties and over 71,000 airstrikes on terrorists since the launch of the Syria campaign, Russian General Staff said in a statement on Tuesday.

"The actions of our Aerospace Forces <…> have changed the course of the fight against terrorism in the Syrian Arab Republic," chief of the Russian Armed Forces General Staff Gen. Valery Gerasimov said at a Defense Ministry select meeting.

Russian Aerospace Forces in Syria Accomplished Task Set by President - Shoigu
More than 12,360 square meters [4,772 square miles] and 499 settlements have been liberated from terrorists since Russia's Aerospace Forces' campaign in Syria began, the General Staff said in the statement.

In the course of the campaign, Russian Aerospace Forces destroyed more than 200 objects of infrastructure under Daesh control, as well as 174 oil plants, Gerasimov said.

"This allowed [us] not only to disrupt the supply system of Daesh' militant groups, but also to deprive them of their main source of income," Gerasimov said.

Gerasimov stressed that all airstrikes were conducted only after the intelligence had been verified by different sources, which included cosmic reconnaissance and data from unmanned aircraft.

At the same time, the US-led international coalition against terrorism has failed to achieve significant results in Syria, instead fueling casualty numbers among civilians and government forces, Gerasimov said.

"They have not achieved any significant results… With that said, a significant number of casualties among civilians and government troops were registered," chief of the Russian Armed Forces General Staff Gen. Valery Gerasimov said at the Defense Ministry's select session.

On January 6, the General Staff announced the start of the reduction of the Russian group in Syria.