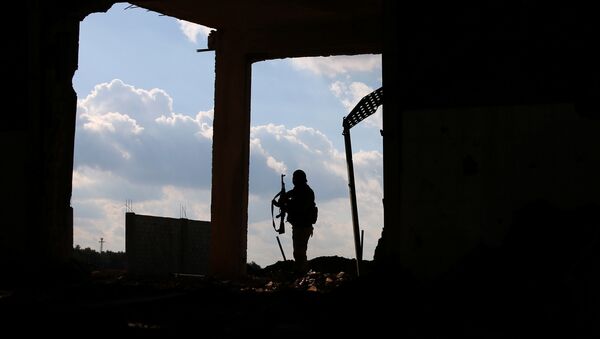 © REUTERS / Alaa Al-Faqir
Subscribe
The Russian Air Force (RUAF) began operations against Daesh militants in Syria in September 2015, allowing the Syrian Army to score territorial gains in many key areas, including Aleppo and Latakia. Russian military assistance will also be very important in a post-war context, to counter terrorist operations, and maintain stability.

Syria's Allies Have Been Key to Its Survival
Notable victories scored by the Syrian Army include the liberation of the ancient city of Palmyra, although Daesh recently recaptured it, and the liberation of Aleppo city.

Even before Russia's direct military intervention in Syria, the Syrian Armed Forces had done a commendable job fighting militants for around 4 years.

Certain units in the Syrian Army, such as the Republican Guard and the 4th Armored Division, are highly competent, and have been key to the success of a number of battles, such as the battle of Zabadani, which began in mid-2015.

Syria has acquired its military hardware from Russia and the former Soviet Union, almost exclusively, for decades. Furthermore, Syrian Army officers and special forces have trained at facilities in Russia decades before the war started.

Although the Syrian Army made significant progress in 2016, several key provinces, such as Idlib, Deir ez-Zor, and Raqqa remain under the control of Islamist groups, such as Daesh. Even once the conflict is over, Russian military assistance will be key to the stability of Syria.

It is likely that Russia will keep some of its military assets in Syria, to assist Syrian security forces. Russia has a naval facility in Tartus, and in December 2016, Vladimir Putin signed a decree to expand the naval base, turning it into a "fully-fledged permanent naval base."

In a post-war context, Syria will require a different type of assistance; instead of direct air support, Syrian security and counterterrorism forces will need the required technology and training to prevent, and deal with terror attacks (like the one in Jableh on the 5th of January).

Russia could potentially play a big part in increasing the competency of Syria's intelligence agencies, as Russian security forces have foiled a number of terror attacks in recent years. They also handled the 2002 Moscow Theatre Hostage Crisis well, using a chemical agent to make the attackers unconscientious, while Russian security forces stormed the building.

How to Transform the Syrian Army Into a Force Capable of Ending the Conflict
On another note, equipping the Syrian Arab Air Force (SYAAF) with advanced jets and surveillance drones may be part of Russia's strategy to help maintain stability in Syria. The drones can potentially be used to monitor and guard Syria's extensive borders, especially with Turkey and Iraq, to prevent the inwards flow of militants and weapons.

Alleviating sectarian tensions is perhaps the most important aspect of stabilizing Syria.

Fortunately, the Syrian government and armed forces are comprised of a range of different religions and ethnicities, making them secular. However, it will be difficult to counter the spread of Salafism in Syria, which has been created and encouraged by Saudi Arabia, and other hard-line Islamist nations.

Ultimately, Russia and Syria will continue to develop their political, military and economic ties once the conflict reaches its conclusion, and it can be said with certainty that Russia's military presence in Syria won't disappear overnight, and it may in fact increase.

000000
Popular comments
that would be a given, although a combined force with Iran and Hezbollah should work.
michael
11 January 2017, 04:29 GMT
000000
Where's Turkey's role in protecting the shared border and as a gateway for Islamists?