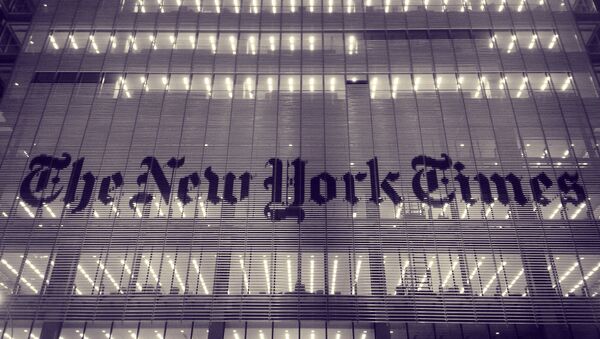 The New York Times published an article about RT on January 7. The article discussed the claims made by US intelligence saying that supposedly RT seeks “to destroy the credibility of spectators towards the democratic procedures in the United States.”

In the original version of the NYT article it was written that supposedly Martin accused RT of propaganda during a live show.

Later on, the article was edited suggesting that Martin actually didn’t do that, but instead condemned Russia's actions with regard to Ukraine and left the channel a few months later because of that.

“What a mess. New York Times' feature piece defending the intelligence report on Russian interference in US elections contained egregious errors about me,” Martin wrote on her Facebook.

She further said that the whole thing is so “unbelievably, audaciously ridiculous.”

“I can’t even begin to tell you how insane this really is. It should be laughed off instead of being taken seriously by these establishment publications.”

But instead you have The Washington Post and the New York Times hailing it as if it is some sort of report that should be taken seriously. “It is a joke,” the journalist said.

Martin discussed the NYT article and their “fake narrative” of stories and how they never stop “selling war and propaganda on behalf of the state.”

Talking about her show on RT she said that even after she expressed criticism about some of Moscow’s policies that she did not agree with, she still could keep her job and her prime time show for a whole year.

Hence, the article suggesting that she left because of “political differences with RT” is very far from the truth. The journalist said that she tried to contact the author of the article, in order to ask him to make corrections to the statements. However, he did not care to make those changes right away and even after some corrections were made it was not exactly how she wanted it to be.

Similarly on her Facebook, Martin noted that she did criticize Moscow's policy, but retired a year later and that was not because of RT’s “propaganda.”

“I worked at RT for an entire year after speaking out and didn't quit because of "propaganda"—in fact, I had paved more editorial freedom there than most of the corporate bought mainstream media and defended that point in every interview I did,” Martin wrote in her Facebook post.

She added that the “paper of record really needs to work on its most basic research, because this is just embarrassing.”

On January 5, US Director of National Intelligence James Clapper said at a US Senate hearing on cybersecurity that RT had been "disparaging" of the US political system and was active in promoting its views on US hypocrisy regarding human rights and generally seeking out fissures in US society. Clapper also accused RT of spreading fake news stories.

US media has also been lashing out against Russian journalists working in the country. In November, shortly after the US presidential election, The Washington Post published a piece claiming that Russian media outlets flooded the country with "fake news" and propaganda with the aim of helping Donald Trump win the election. The newspaper later updated the article stating that it does not vouch for the accuracy of the authors'  statements.

000000
Popular comments
Breaking the set with Abby Martin - I really liked it
kooka
10 January 2017, 19:53 GMT
000000
This reaffirms why I don't read anything from those fake news agencies. As a matter of fact I don't read any paper in the us or Britain.
Q
10 January 2017, 20:43 GMT
000000
Newsfeed
0
New firstOld first
loader
LIVE
Заголовок открываемого материала
Access to the chat has been blocked for violating the rules . You will be able to participate again through:∞. If you do not agree with the blocking, please use the feedback form
The discussion is closed. You can participate in the discussion within 24 hours after the publication of the article.
To participate in the discussion
log in or register
loader
Chats
Заголовок открываемого материала
Worldwide
InternationalEnglishEnglishMundoEspañolSpanish
Europe
DeutschlandDeutschGermanFranceFrançaisFrenchΕλλάδαΕλληνικάGreekItaliaItalianoItalianČeská republikaČeštinaCzechPolskaPolskiPolishСрбиjаСрпскиSerbianLatvijaLatviešuLatvianLietuvaLietuviųLithuanianMoldovaMoldoveneascăMoldavianБеларусьБеларускiBelarusian
Transcaucasia
ԱրմենիաՀայերենArmenianАҧсныАҧсышәалаAbkhazХуссар ИрыстонИронауОssetianსაქართველოქართულიGeorgianAzərbaycanАzərbaycancaAzerbaijani
Middle East
Sputnik عربيArabicArabicTürkiyeTürkçeTurkishSputnik ایرانPersianPersianSputnik افغانستانDariDari
Central Asia
ҚазақстанҚазақ тіліKazakhКыргызстанКыргызчаKyrgyzOʻzbekistonЎзбекчаUzbekТоҷикистонТоҷикӣTajik
East & Southeast Asia
Việt NamTiếng ViệtVietnamese日本日本語Japanese俄罗斯卫星通讯社中文（简体）Chinese (simplified)俄罗斯卫星通讯社中文（繁体）Chinese (traditional)
South America
BrasilPortuguêsPortuguese
NewsfeedBreaking
14:31 GMTUS Investment Firm Purchases Italy's Oldest Football Team
14:29 GMTUS to Find Ways to Get More Help to Haitian Migrants After US Envoy Resigned, State Dept. Says
14:25 GMTAnthony Joshua Says He Would ‘Fight King Kong' if He Had to as He Defends Titles Against Usyk
14:18 GMTFormer Nazi Helmut Oberlander Dies in Canada Before He Could Be Deported, Reports Say
14:07 GMTWhat's Behind Africa's Increasing Drive to Launch Satellites?
14:06 GMTExpo 2020 in Dubai Set to Boost Economic Development in Arab World, Organiser Says
13:58 GMTTwo Afghan Evacuees Charged With Sexual, Physical Assault in US, Justice Department Says
13:51 GMTBritish Government Preparing for 'Worst-Case Scenario' of Gas Prices, Says MP
13:43 GMTOutrage as Missouri High School Students Reportedly Come Up With Petition to Reinstate Slavery
13:42 GMTEC Does Not Expect Increase in Smartphone Prices Over Universal Charging Port Regulation
13:26 GMTAmericans Favour Trump Over Biden After Afghanistan Pullout Disaster, Poll Says
13:25 GMTComputer Game to Measure Children's Mental Development Launched by MSUPE
13:21 GMTDay 3 of 76th Session of UN General Assembly
13:18 GMTRoscosmos Starts Preparations for Landing First Russian Cosmonaut on Moon
13:18 GMTAs Modi Meets US Firms, Google Moves Court Against India's Competition Watchdog Over 'Leaked' Report
13:07 GMTBP Says It's Temporarily Closed Some UK Sites Due to Lack of Diesel, Unleaded Supply Problems
13:01 GMTView From the Top: Satellite Catches Images of Volcanic Eruption on La Palma
13:00 GMTUS Special Envoy for Haiti Resigns to Protest "Inhumane" Deportation of Haitians
12:54 GMTJoshua and Usyk Hold Press Conference Ahead of Fight for Heavyweight Champion Belt
12:53 GMTIndian Supreme Court to Set Up Committee to Investigate Pegasus Spyware Scandal