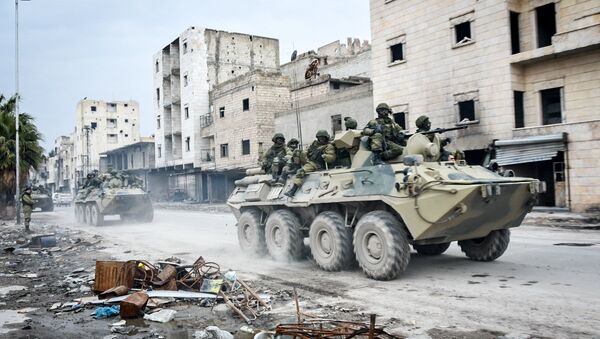 © Ministry of defence of the Russian Federation
/
Go to the photo bank
Subscribe
US Secretary of Defense Ashton Carter has recently claimed that Russia's counterterrorism efforts in Syria are "virtually zero." Political analyst Andrey Kortunov told Radio Sputnik that these comments are meant to send a signal to next leaders of the Pentagon and consolidate an opposition to US President-elect Donald Trump.

"I think that [Carter's remarks are] more than hysteria," the analyst said. "I think that they are an attempt to consolidate the opposition to Trump which is in the making. This is also a signal to the Pentagon's incoming leadership, to those, who will to a certain extent determine the US defense policy in the next four years."

The US-led coalition launched Operation Inherent Resolve ostensibly aimed at degrading and destroying Daesh in June 2014, but achieved limited success both in Iraq and Syria. For its part, Moscow's limited military involvement in Syria has helped to turn the tide of war, push Daesh and other terrorist groups from key cities and achieve a nationwide ceasefire which is still holding.

Kortunov, Director General of the Russian International Affairs Council (RIAC), added that many senior US defense officials shared Carter's stance and will keep pushing it through. As a result Trump "will have to take these sentiments into account" since they will hardly change in the near future.

CIA Chief 'Largely Responsible for Chaos' in Syria, Not Russia
The political analyst also observed that Carter's criticism is not constructive. The US defense chief "has been critical of Russia for supporting Bashar al-Assad, but he has failed to provide any alternative," he said.

Kortunov further said that the Pentagon's approach to Syria in recent months has come in sharp contrast to that of the US State Department.

"I think that high-ranking officials in the Pentagon must take at least partial responsibility for undermining the agreements brokered by Russian Foreign Minister Sergei Lavrov and US Secretary of State John Kerry. The Pentagon to a large extent ruined the deal inked by top diplomats from Russia and the United States which envisioned joint activities to resolve the Syrian crisis," he said.

Russia and the United States reached a breakthrough deal which paved the way for a nationwide truce in Syria in early September. The fragile ceasefire collapsed a week later following multiple violations from US-backed rebels. The deal was particularly badly affected by a US-led aerial attack on the Syrian Arab Army's base in the city of Deir ez-Zor.

000000
Popular comments
Some ones some where nearly have strokes because some body are getting on the way that billions in efforts failed to bear intended any fruits
peaceactivist2
10 January 2017, 14:34 GMT2
000000
Paying out shed loads of money doesn't they hired any quality help!!!