Most US Troops Have Unfavorable View of Obama’s Time as Commander in Chief, Poll 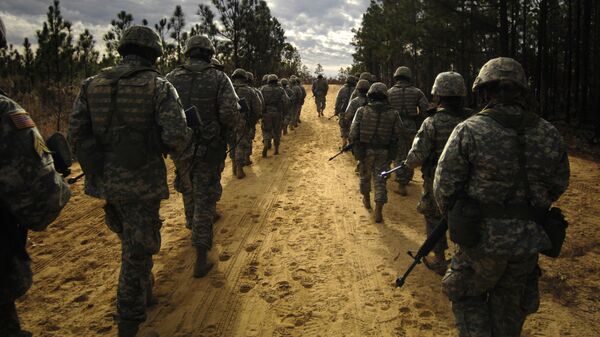 © Flickr / The U.S. Army
Subscribe
International
India
Africa
Many US troops hold an unfavorable view of President Barack Obama’s time as their Commander in Chief, perhaps explaining why they voted at a 2-1 ratio for Donald Trump over Hillary Clinton.

Poll: Americans Feel Less Safe, 58% Say Obama Too Weak to Take Action on Terror
A new poll, conducted by the Military Times/Institute for Veterans and Military Families, found that 51.5 percent of members of the military hold either “very unfavorable” or “somewhat unfavorable” views of the outgoing President’s time in office. Just 36 percent of those polled found his time in office to be either “very favorable” or “somewhat favorable.”

“His moves to slim down the armed forces, move away from traditional military might and overhaul social policies prohibiting the service of minority groups have proven divisive in the ranks,” the Military Times reported. “His critics have accused him of trading a strong security posture for political points, and for allowing the rise of terrorists like the Islamic State group whom the wars in Iraq and Afghanistan were supposed to silence.”

Obama’s move to decrease military personnel was one of the biggest complaints according to the survey, as 71 percent think the numbers should have instead been increased. Another issue is the withdrawal of combat troops from Iraq, which 59 percent of the military personnel polled said they believe made America less safe. Additionally 64 percent said that the President lacks focus on the biggest dangers facing the nation, with 64 percent believing that China is a significant threat.

There were some issues where Obama polled well among service members, particularly in the use of drones and special forces teams for precision strikes, something which 60 percent of those polled approve of. They also agree with the President’s belief that building strong alliances with foreign powers helps to secure America.

“That’s a conflicted response to a president who entered the White House vowing to end US involvement in Iraq and Afghanistan but instead leaves as the first American president to oversee two full terms with combat troops deployed to hostile zones,” the Military Times noted.

When looking at results by branches, the Marine Corps held the least favorable view of Obama, with 60 percent viewing his time in office as unfavorable. The Navy had the most members who view his time favorably, but even there only 43.4 percent held a positive view of his presidency.