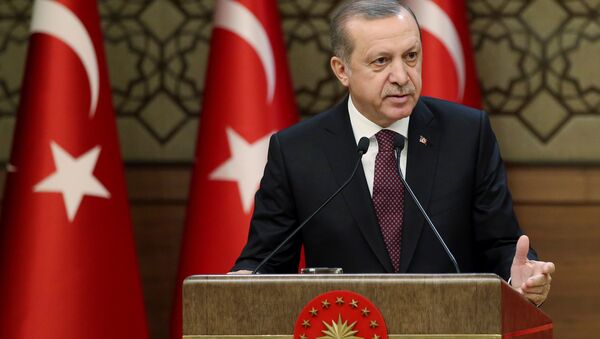 Trump Team Assures US Chamber of Commerce Not to Oppose Trade With Turkey
MOSCOW (Sputnik) — Turkish President Recep Tayyip Erdogan said Monday he expected that the relations between Turkey and the United States would gain pace after US President-elect Donald Trump assumed office on January 20.

"In particular, I believe that we will gain momentum regarding regional issues through common understanding," Erdogan said, speaking at the 9th Annual Ambassadors' Conference in Ankara, as quoted by the Daily Sabah newspaper.

Erdogan noted that Turkey expected the United States to support the country in counterterrorism issues, particularly, the fight against the Daesh, outlawed in many countries, including Russia, and the so-called Fethullah Gulen Terrorist Organization (FETO), which Ankara blames for the July 2016 coup attempt, according to the newspaper.

Relations between the two countries began deteriorating due to Washington’s support for Syrian Kurdish Democratic Union Party (PYD) forces to counter the Islamic State in Syria and its refusal to hand over Muslim cleric Fethullah Gulen, FETO's leader.