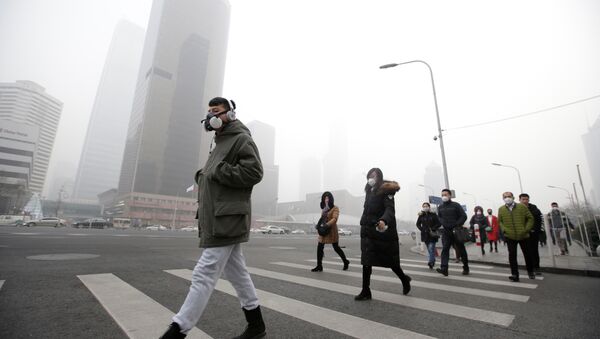 © REUTERS / Jason Lee
Subscribe
International
India
Africa
Zou Yi, a 56-year-old businessmen from Beijing, lives in his 13th floor flat across from Beijing Television’s headquarters. Some days he can see every detail of the skyscraper; some days he can hardly see it at all because of heavy smog which he decided to document every morning by taking photos from his window.

Going Green: China to Invest $360Bln in Renewable Energy Before 2020
Every morning Zou Yi wakes up to make a shot of Beijing’s polluted skies from the window of his living room, no matter whether the skyline is clear or hazy. Then he posts these photos to Chinese social media, Weibo and WeChat, along with the air quality index, so that the pictures speak for themselves.

This initiative started in 2013 as a complaint about a bad air day in the city and has grown into a media phenomenon. In September 2015 South China Morning Post reported that Zou Yi took it even a step further by starting a project with top Chinese scientists.

On January 8, China People’s Daily published a new collage of 366 images taken by Zou Yi in 2016.

Collage of 366 images taken by Beijing citizen from his window in 2016 pic.twitter.com/41yBTrQRER

​Heavy smog encroached the Chinese capital and its surroundings in the first days of the new year. On January 4, the highest warning, an environmental red alert, was raised in in parts of the Beijing-Tianjin-Hebei region, as well as in the provinces of Henan, Shandong, Anhui and Jiangsu, state news agency Xinhua reported.

This 10-second time-lapse footage shot by Chas Pope, a British expat in China, captures a thick yellow plume of smog creeping into and covering Beijing’s downtown in a haze.

On Sunday, a cold front dispersed the smog which had been hovering over the city, and people with children who had been cloistered indoors for the week went to parks and out on the streets for the first time since the beginning of the year, Xinhua News reported.