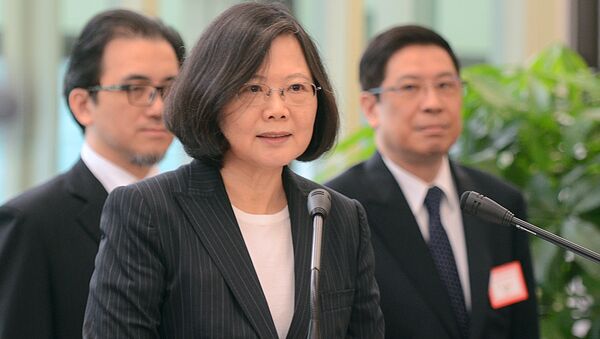 After Taiwan president Tsai Ing-wen made a stop in Houston, Texas, on Sunday, Chinese media warned US President-elect Donald Trump that Beijing would “take revenge” if he broke with its One China policy. While in Texas, Tsai met with Governor Greg Abbott, Senator Ted Cruz, and spoke with Senate Armed Services Committee head John McCain by phone.

Tsai met with Republican lawmakers en route to a diplomatic trip to South America, where she will visit Nicaragua, Guatemala, El Salvador, and Honduras. She will also transit San Francisco on January 13, on her return trip to Taiwan.

She exchanged gifts with Abbott during their meeting, giving him a Taiwanese vase and receiving a clock with the Texas state seal on it. "It was an honor to meet with President Tsai and discuss how our two economies can expand upon our already prosperous trade partnership," Abbott said in a statement.

Beijing has repeatedly asked the Washington to disallow Tsai’s visit, and tensions between the US and China have been strained since a December 2016 phone call between Trump and Tsai, which ended nearly 40 years of diplomatic custom in which Taiwan did not directly address the sitting administration of the US government.

As a result, Beijing has threatened economic and military pressure against Taiwan, sending it’s Liaoning aircraft carrier and a fleet of ships around the country’s southern edge in a show of force, while claiming to be conducting standard drills.

The One China policy holds that Taiwan and the mainland are a single entity, making Taipei ineligible to establish independent diplomatic relations as a sovereign entity. Beijing is wary that Tsai may use her time in the US to push for Taiwan’s independence.

The Global Times, a state-owned Chinese media outlet, wrote in an editorial following the visit, "Sticking to (the one China) principle is not a capricious request by China upon US presidents, but an obligation of US presidents to maintain China-US relations and respect the existing order of the Asia-Pacific."

"If Trump reneges on the one-China policy after taking office,” the statement reads, “the Chinese people will demand the government to take revenge. There is no room for bargaining."

Cruz said that the Chinese consulate sent letters to him and other members of Congress asking them not to meet with Tsai while she was in the US. Cruz said, "The People's Republic of China needs to understand that in America we make decisions about meeting with visitors for ourselves…This is not about the PRC. This is about the US relationship with Taiwan, an ally we are legally bound to defend."

White House spokesman Josh Earnest clarified that Cruz’s meeting with Tsai, "doesn't have any bearing whatsoever on our continued pursuit of a one-China policy."

On Monday Chinese Foreign Ministry spokesman Lu Kang, said that "relevant US officials," should handle Taiwan carefully so as not to upset Beijing’s relations with Washington. "We firmly oppose leaders of the Taiwan region, on the so-called basis of a transit visit, having any form of contact with US officials and engaging in activities that interfere with and damage China-US relations," he said.