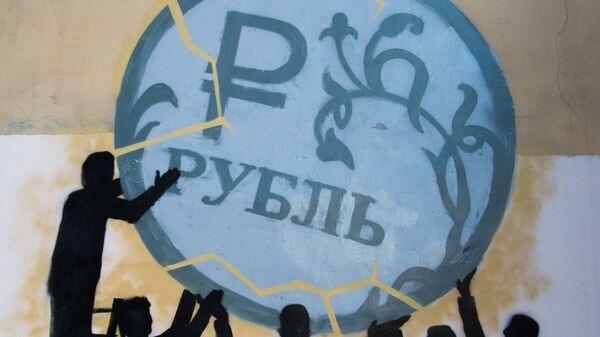 © Sputnik / Igor Russak
/
Go to the mediabank
Subscribe
International
India
Africa
The Russian national currency has been strongly performing since the beginning of the year. During the first 10 days of January, the US dollar dropped below 60 rubles/$1. Thus, the ruble reached a record high for the past two years. Experts predict that in the coming months the Russian currency may strengthen to 55-57 rubles/$1.

On January 6, the Moscow Stock Exchange closed at 59.6 rubles/$1, against 61.3 on December 30. Since the first nine days of the year are holidays in Russia, the Russian currency is usually in demand by foreigners during this period.

This year’s trend was unexpected because in previous years, in December and January, the ruble traditionally weakened.

In an interview with Radio Sputnik, Yaroslav Lissovolik, chief economist at the Eurasian Development Bank and professor at the Diplomatic Academy of Russian Foreign Ministry, pointed out that there are several driving factors behind the strengthening of the ruble.

"The rise in oil prices was a major factor but this appreciation of the ruble is outpacing the rise in oil prices. It points to the importance of capital flows [to Russian assets]. This may be due to the fact that global financial markets are starting to perceive the ruble as one of the most attractive currencies across emerging markets," Lissovolik said.

According to him, the trend has been clearly seen from 2016 to 2017. Global financial institutions are sending a signal that the "ruble is probably one of the best bets" of this year.

World
Global Oil, Natural Gas Prices to Remain Volatile in 2017 - Moody’s
The economist also added that the current trend is also indicative of some broader processes in the Russian economy, especially its stabilization.

"The Russian economy is going from negative territory last year to most likely a positive territory this year. Also it is certainly important that we’re going to have record low inflation rates this year," Lissovolik said.

He suggested that stable oil prices, the strong ruble policy by the Russian Central Bank and high-interest rates maintained by the Central Bank will have a stronger effect on the financial market this year.

"I think that this ruble appreciation that we saw in the beginning of the year is probably going to continue and may last for at least next several months," the economist said.

Russia
Russian Economy May Start Growing in Early 2017 - Ex-Finance Minister
According to Natalia Orlova, chief economist at Alfa Bank, the trend is indicative of traders’ positive expectations as well as of the ruble’s growing attractiveness.

"Foreign investors’ interest to Russian assets has recently been increasing due to an improvement in the Russian economy," said Alla Dvoretskaya.

For example, the share of non-resident holders of Russian government bonds has (OFZ) increased from 21 to 27 percent in a year. The situation in the Russian economy is gradually improving de to a lowering inflation rate, a drop in capital outflows and the strengthening of the budget system, she explained.