US Deep State in Deep Trouble 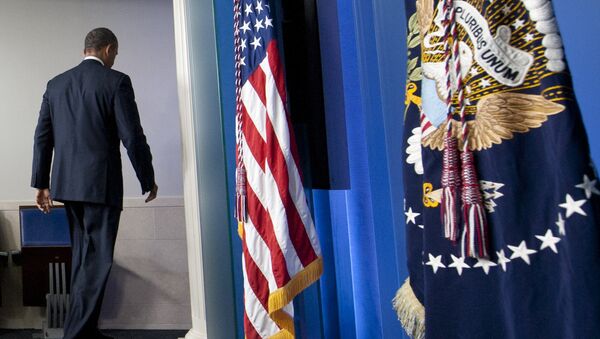 Finian Cunningham
All materials
US ruling power is in deep trouble because there are growing signs that the mass of citizens are no longer beholden to the supposed authority residing in Washington.

Once the legitimacy of would-be authorities begins to collapse in the eyes of the people, then profound political change is in the offing, as history shows us through countless empires that came and went – often ignominiously.

The so-called American Deep State comprising the military-intelligence apparatus and its operatives in the political and media establishment has put its credibility on the line over allegations of Russian interference in the US elections.

Those allegations are threadbare, indeed baseless, despite concerted, overweening attempts by the Deep State to conjure up something of substance.

US Intel 'Laid Itself Open to Ridicule' by Accusing Russia of Hacker Attacks
The latest high-level intelligence report from the CIA, NSA, FBI and other US spy agencies on alleged Russian cyber hacking may have “wowed” President Barack Obama, various members of Congress and the corporate-controlled news media.

Not so for ordinary Americans. Among rank-and-file citizens the reaction has been underwhelming to say the least. And that should be a matter of anxiety for the ruling establishment. If the people can no longer be commanded, then the whole foundation for power begins to erode like a sandcastle.

Among ordinary voters far removed from the Washington Beltway Bubble the consensus is one of derision towards the once-revered US intelligence community.

“Sore losers”, “sour grapes”, “crybabies” and “absurd” were just some of the disbelieving responses from ordinary folks about claims that Russian agents directed by Russian President Vladimir Putin had tipped the US November election in favor of Donald Trump over Hillary Clinton.

“I don’t believe the [US] intel report,” said one man in Louisiana. “Why is everybody so afraid of Russia? I’m not against Putin.”

WikiLeaks: US Intel Report on Russia Hacking 'Has Poor Sourcing and No Evidence'
Another man, a retired US air force officer, added: “From the parts of the [US intel] report I’ve seen it seems silly.”

President-elect Trump, once again, seems more in tune with the real, pressing concerns of common citizens. He emerged from his so-called “briefing” by US intelligence chiefs last Friday and pointedly refused to join the Washington blowhards accusing Russia of “an act of war”. Trump in fact followed up with a comment that it was only a “stupid” person would not want to have good relations with Russia.

This was not the response that the spooks wanted from Trump. The CIA and their surrogates in the Obama administration, Congress and the media were building up the US intel report like a witch-hunt against anyone who dares to dissent from the allegations of Russian cyber interference. Unlike warmongering Congress members such as John McCain and Lyndsey Graham, Trump has not jumped on the bandwagon to demonize Russia.

And the thing is that people beyond the thrall of the Deep State centered in Washington appear to agree with Trump. At a time of immense social challenges from poverty, unemployment, financial indebtedness, deteriorating infrastructure and public services, and so on, a US policy of hostility towards Russia seems like an alien distraction. A contemptible waste of priority and resources, not to say a reckless drumbeat to war between nuclear powers.

Shocker: 'Proof' of Russia's Trump Support Was Compiled During Obama's Election
The US intelligence agencies, aided by the Obama White House and mainstream media, tried to muster gravitas to play its “Russian card” against Trump. But Trump and the popular sentiment out there are not responding in the deferential manner expected by the spooks.

In fact, despite sensationalist headlines in the mainstream media about “Putin ordering an influence campaign to help Trump win the election”, the US intelligence agencies are now in real danger of being exposed as ridiculous liars.

The collapse of the US establishment has been underway for sometime, but lately the momentum has quickened with the election of Trump and the mainstream media’s penchant for “fake narratives”. Last week the Washington disgraced itself by running a story about Russia hacking into the US electric, a story which was quickly exposed as “fake news”.

On the latest US intel report, as well as Trump and ordinary Americans, many observers from around the world were taken aback by the amateurish dearth of evidence and generally low quality of analysis. Independent cyber security experts, including US-based ones, poured scorn on the claims against Russia.

US Readiness to ‘Throw Rocks’ at Russia Marks Need for Policy U-Turn
The US spy agencies claim that they have “supporting evidence” that Russia hacked Hillary Clinton’s emails, but they say, unconvincingly, that they can’t disclose the information in order to protect “sensitive sources and methods”. Such a conjuring trick just makes the US spooks and the subservient news media look even more ridiculous.

A major giveaway was the disproportionately huge focus that the US intelligence report devoted to trying to discredit Russian news media outlets, RT and Sputnik. The report claims that the news services are part of the Kremlin’s “influence campaign” and then cites its own ropey rationale as “evidence” that Russia hacked the US election. If that’s the best that America’s “national security guardians” can come up with then we can be sure their case against Russia is null and void.

There was a time in the American past when shadowy, unelected elites could control society through monopolistic, servile media and servile politicians kowtowing to their supposed authority. There was also a naive belief among people that the secret services were defending the nation’s best interests.

Not any more alas. People have got wise to the massive manipulation and criminality of such shadowy powers who orchestrate wars and regime changes all around the world for the narrow benefit of elite corporate power. Ordinary Americans pay with their lives and livelihoods for the machinations of the ruling cabal.

The Deep State intel chiefs may have been fawned over by Obama, Congress and the media in their outlandish claims of Russian subversion. But growing numbers of ordinary people in the US and around the world can see through the lies and blatant agenda of hostility towards Russia – an insane hostility that only serves the elite interests of the Deep State.

The once feared, and revered, US Deep State is now facing a deep dilemma and maybe even an existential crisis. For it knows deep down that its erstwhile credibility and authority are shot to pieces.

How Trump May Have Just Caused Russia to Fall Back in Love with the USA
Down through history, the American rulers got away with their charade of inciting wars and conflicts through false flags and contrived catastrophes: the not-so-secret Japanese attack on Pearl Harbor, the fabricated Gulf of Tonkin incident that escalated the US genocidal war on Vietnam, the dubious 9/11 terror attacks and Iraq’s non-existent weapons of mass destruction, to mention just a few.

This same warmongering American ruling class want another arms race, Pentagon-pumping Cold War with Russia. But this time they have played a card that is all too evidently blank. The US spooks and their elitist establishment know that Trump, the American people, Russia and the rest of world all know that they have nothing to offer.

No credibility, no morals and no authority, the US Deep State is in deep trouble.