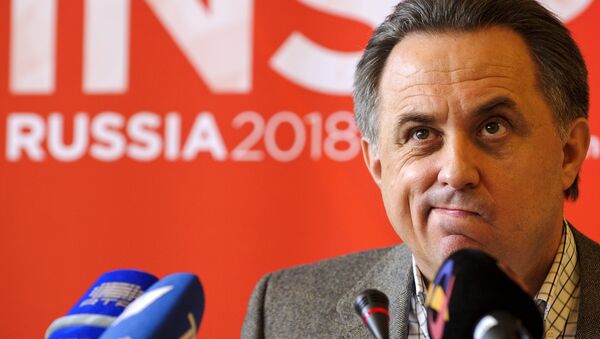 © AFP 2021 / FABRICE COFFRINI
Subscribe
The recommendation of the United Kingdom Anti-Doping (UKAD) chief to ban Russia from the 2018 Winter Olympic Games is puzzling as the UK agency has been cooperating with the country, Russian Deputy Prime Minister Vitaly Mutko said Sunday.

All Possible Measures Should Be Taken for Sport to Stay Fair, Clean - UKAD
MOSCOW (Sputnik) — On Saturday, UKAD chief David Kenworthy said that Russia should be banned from the 2018 Winter Olympics in South Korean Pyeongchang.

"It was striking to me. We will have several meetings on the issue. We pay huge money to the United Kingdom Anti-Doping agency. They have been supervising us for a year and did not detect any special programs during the year. I am simply surprised. As of today, we pay them money and actually we can raise a question whether we should cancel the deal and switch over to another organization. If they do not believe in us, than why should it supervise us?" Mutko said.

He added that from a legal perspective there is no doubt that the Russian team should take part in the 2018 Olympics.

"I'll tell you once again, if you look at the situation from a legal perspective, in terms of the legal framework, with a view to fairness, there is no doubt in [Russia's participation in the 2018 Olympics]. Today, our team is open, it is in the public eye… It had been in the public eye for two years already," Mutko said.

The doping scandal, simmering since 2014, escalated in July 2016 when the World Anti-Doping Agency (WADA) presented a report accusing Russia of running a state-wide doping program and urging the the International Olympic Committee (IOC) to consider a blanket ban on the entire Russian Olympic team. The IOC instead let individual sports federations act on the issue.