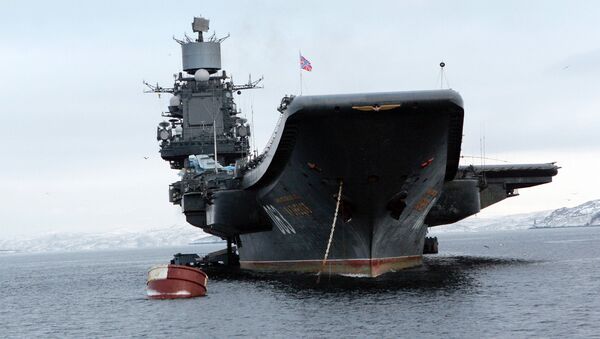 In 2016, the Admiral Kuznetsov took part in a combat operation for the first time as the vessel was deployed to the Mediterranean to assist the ongoing Russian airborne campaign in Syria.

A group of Russian warships headed by the Admiral Kuznetsov, accompanied by the Pyotr Veliky battle cruiser, the Severomorsk and Vice-Admiral Kulakov anti-submarine destroyers, the Admiral Grigorovich frigate and support vessels, carried out a counterterrorism operation in Syria starting on November 8.

"The strikes were delivered against terrorists' infrastructure, groups of militants and vehicles, firing positions and strongholds of illegal armed formations. The Admiral Grigorovich frigate attacked Daesh targets in Syria with Kalibr cruise missiles. All targets were hit," commander of the Russian military group in the country Col. Gen. Andrei Kartapolov said earlier this week.

According to the commander, it was the first time Russia has used its naval carrier-based aviation against ground targets.

Pullout of Russia's Admiral Kuznetsov Group From Syria 'Act of Good Will'
In late-2016, Russia’s only aircraft carrier celebrated its 26th anniversary. The vessel was first named Riga, then the name was changed to Leonid Brezhnev, this was followed by Tbilisi. On December 25, 1990, the carrier was commissioned under the name Tbilisi.

A technical proposal to build a heavy aircraft-carrying missile cruiser (TAVKR, in Russian classification) of the project 1143.5 was developed in April 1978.

On October 13, the Soviet government issued an order to develop a schematic and technical design of the future cruiser by 1980. At the same time, the Soviet Navy and the Soviet Air Force were ordered to formulate technical requirements for the ship and its aircraft.

In September 1979, the schematic design was completed and submitted for consideration to the navy. The document was approved by then Commander of the Soviet Navy Admiral Sergei Gorshkov who recommended increasing the cruiser’s wing from 42 to 52 aircraft.

Russia Announces Further Syria Troops Pullout as New Ceasefire Holds
The carrier was redesigned to carry 14 Su-27K jet fighters, 16 Yak-141 VTOL jets and 22 Ka-25 helicopters at the same time. However, these measures would increase its displacement to 65,000 tons, which was opposed by the Soviet General Staff.

In the early-1980s, an order was issued by then-Defense Minister Dmitry Ustinov to decrease the displacement by 10,000 tons and abandon catapults for launching planes from the deck.

This design presumed that the Yak-141 vertical takeoff and landing fighter aircraft would be the main jet in the wing.

However, in March 1980, the Soviet government ordered delaying the construction of the 1143.5 project aircraft-carrying cruiser and the development of the ship was extended for two years. 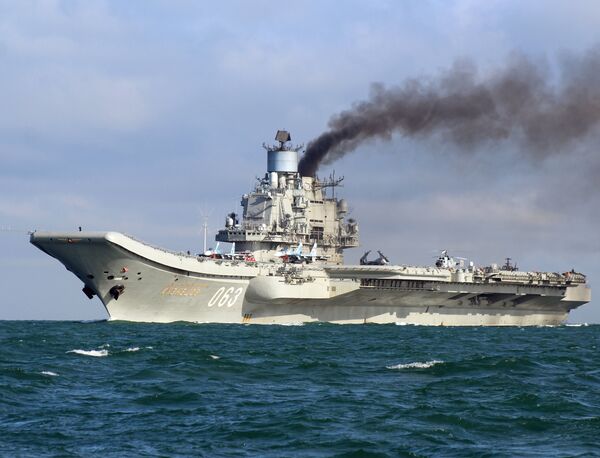 Finally, the construction of the Admiral Kuznetsov (at the time under name Riga) began only in September 1982, with it constructed at Chernomorskiy Shipyard, also known as Nikolayev South Shipyard.

On November 1982, after the death of Soviet leader Leonid Brezhnev, the aircraft-carrying cruiser changed its name to his posthumously.

Admiral Kuznetsov and its Aircraft

Alongside the development of the project 1143.5, the Soviet aviation design bureau developed supersonic carrier-based fighter jets to operate from the ship. 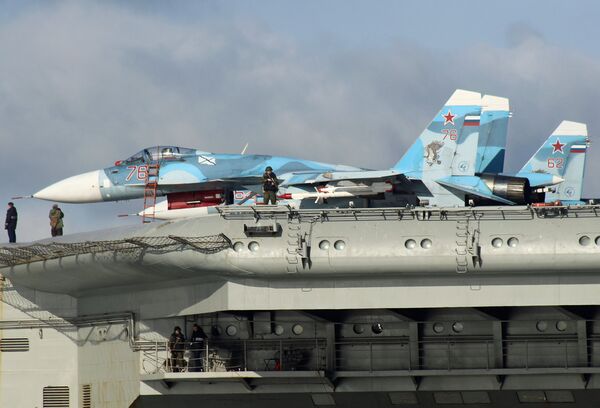 The Yak-141 VTOL jet was expected to be the third type of aircraft for the Admiral Kuznetsov, but its development was regularly delayed.

Its launch weight was nearly 32,000 tons, a record high for the Soviet ship-building industry.

As the first Soviet aircraft-carrier, the ship could carry up to 50 aircraft and helicopters, including supersonic fighter jets, for the first time in the history of the Soviet Navy.

In order to enable take-off of fixed-wing aircraft, the Admiral Kuznetsov was equipped with an increased deck area, a ski-jump at the end of the deck, arresters and blast fences. Its fuel reserves were increased by 1,000 tons and its ammunition reserves were expanded twofold.

At the time the carrier was launched, it has a complement of 2,100 personnel.

Only Su-27K and MiG-29K jets could take-off and land on the Admiral Kuztensov’s deck at the time. The Yak-141 began test flights, but finally was not put in service.

On October 1989, the carrier began its maiden voyage. The first aircraft landed on its deck on November 1, 1989. On December 4, the cruiser was officially named Admiral Flota Sovetskogo Soyuza Kuznetsov, after Admiral of the Soviet Fleet Nikolay Kuznetsov.