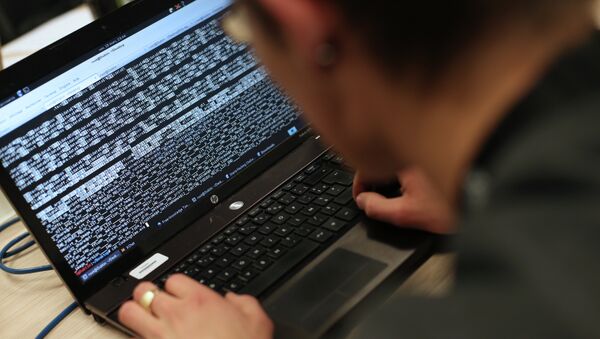 The declassified version of the US intelligence report on the Kremlin's supposed meddling in the 2016 presidential campaign in the US through high-profile cyberattacks has apparently left many journalists, including some of Moscow's harshest critics, puzzled, with many saying that the document lacks the evidence to back up its assertions.

That they filled *half* the report with old, public-source information about RT shows how flimsy at least this version of the report is. https://t.co/VCyzwxjey7

​Kevin Rothrock, a web editor at The Moscow Times, called the document "an embarrassment."

I'll say it: the declassified USG report "Assessing Russian Activities and Intentions in Recent US Elections" is an embarrassment.

That there's nothing on the table in this cartoon certainly captures the substance of the declassified report. https://t.co/p2zedkqw4A

I’m kinda losing it, seeing the US government officially talking about Russian Internet trolls as a part of a national security threat. pic.twitter.com/lNt6Dognab

'Dear CIA!': RT Editor-in-Chief Mocks Accusations of 'Kremlin Propaganda'
​On Friday, the Office of the Director of National Intelligence released a declassified report, accusing Russian President Vladimir Putin of ordering "an influence campaign" targeting the 2016 presidential election in the US. The US intelligence community has accused Russia of carrying out cyberattacks on the Democratic National Committee (DNC) and John Podesta, the chairman of Hillary Clinton's 2016 US presidential campaign.

The document has been criticized for not providing compelling evidence to support its claims, which Moscow has repeatedly denied.

Stephen Hayes, Editor-in-Chief of The Weekly Standard and Fox News contributor, said that the report was "little more than a collection of assertions."

The intel report on Russia is little more than a collection of assertions. Understand protecting sources/methods, but it's weak.

​Shaun Walker, the Moscow correspondent of The Guardian, observed that the report looked like something that a few journalists "compiled over a couple of days, not serious [intelligence] agencies over months."

Is it just me or does report look more like something a few journos compiled over a couple of days, not serious Intel agencies over months?

I don't understand. Thought it was supposed to be 100 pages? Five cursory pages and a large, old annex about RT?! Is there more coming?!

​"The NYT calls the report 'damning and surprisingly detailed.' We must be reading different reports," the journalist added.

The NYT calls the report "damning and surprisingly detailed". We must be reading different reports. https://t.co/tItMXQn1N3

​Former US Ambassador to Russia Michael McFaul, a staunch critic of the Kremlin, noted that the report left many questions unanswered.

Glad to see DNI report published today, but SO MANY questions still left unanswered. I worry that this story will fade, esp after 1-20-17.

NY Times says the US intelligence report on Russia is "damning and surprisingly detailed," then adds that it contains no actual evidence pic.twitter.com/qpncWboVEV

The DNI report has no more than a page about actual hacking. There are more references to RT covering Occupy Wall Street than to hacking.

​The DNI report released on January 6 is a declassified version of a highly classified assessment provided to US President Barack Obama. The US intelligence community said that the document cannot include "the full supporting information, including specific intelligence and sources and methods" since "the release of such information would reveal sensitive sources or methods and imperil the ability to collect critical foreign intelligence in the future."

JFC. A big chunk of today's Russia hack report is from… 2012. https://t.co/Y7ESB3veoj pic.twitter.com/ziCRJ3SX4P

Maybe the IC has reams of new classified evidence showing Russia did the DNC hack. No new evidence in this report. https://t.co/cHAuxReChh

The declassified US intel report on Russian hacking is full of bombshells like "RT is controlled by the Kremlin." https://t.co/XnurfF4mJn