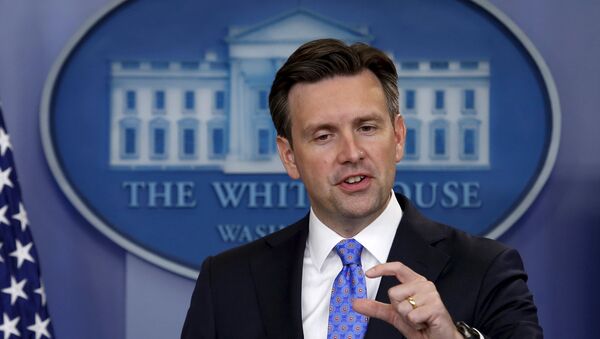 White House Press Secretary Josh Earnest had almost nothing to answer at a press-briefing on Tuesday when asked about why President Barack Obama expelled 35 Russian diplomats over hacking allegations but did not expel any Chinese diplomats for the alleged hack of a US government agency.

ABC journalist Jon Karl referred to the data breach that took place in 2014 and 2015 at the US Office of Personnel Management (OPM). As a result of the attack, personal data of over 21 million former and current US government employees was stolen. Media cited US officials blaming China for the hack, although China has rejected any involvement in in the cyberattacks.

"Why did the White House do nothing publicly in reaction to that hack? Which in some ways, was even more widespread than what we saw here from the Russians?" the journalist asked Earnest.

WikiLeaks: US Intel Report on Russia Hacking 'Has Poor Sourcing and No Evidence'
However, the press secretary could not come up with a clear answer.

Earnest said that the two cyber incidents are "materially different."

In turn, Karl stressed that the OPM hack was a very serious incident and no steps have been taken by Washington in response.

"It is true that there was no public announcement about our response, but I can’t speak to what response may have been initiated in private," Earnest answered.

"But no diplomats expelled, no compounds shut down, no sanctions imposed, correct? You don’t do that stuff secretly," the journalist noted.

This apparent discrepancy naturally captured the attention of Twitter.

@realDonaldTrump The DNC was a leak, and Podesta was phished. There was no "hacking". China DID hack the OPM, why NO retaliation by Obama?

The hack of OPM violated the privacy of 18 million Americans, yet Obama did nothing. Podesta gets phished and Hillary loses? Defcon 1.

When are we sanctioning China for the OPM hacks?

The OPM hack affected millions of average Americans. Obama did nothing.

What did Obama do in retaliation for China's OPM hack? I forget.

US DNC’s Negligence Allowed Hacking Into Party’s Servers – Trump
"The OPM hack in particular was much more damaging, and was conducted directly against the government of the United States. The hack […] exposed the background-check files of anyone who applied for a security clearance. […] China’s intel agencies have their hands on a lot of very sensitive information they can use to potentially blackmail people in highly sensitive positions," an article on the political news and commentary website Hot Air.

In a phone interview with The New York Times, US President-elect Donald Trump once again criticized the intense focus on "Russian hackers," describing the situation as a "political witch hunt."

"China, relatively recently, hacked 20 million government names. How come nobody even talks about that? This is a political witch hunt," Trump said.