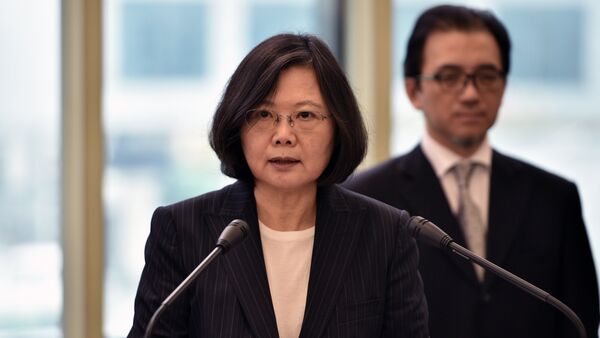 Taiwan's President Tsai Ing-wen left for the United States Saturday on her way to Central America, a trip that will be scrutinized by China. Sputnik spoke with Chinese political experts in an interview about this trip and how it may be related to US-Chinese bilateral relations.

Beijing Urges Washington to Realize 'Sensitivity' of Taiwan Issue
While the focus of the nine-day trip is to bolster relations with Taiwan's Central American allies, Tsai's US stopovers are being closely watched by experts amid speculation that she may make contact with president-elect Donald Trump and his team.

The political and legal status of Taiwan has been a matter of dispute between the People’s Republic of China and Taiwan for many years. Due to this tension, Taiwan president’s visit to Latin America is being highly scrutinized.

In Central America, Taiwan is friends with 11 countries, in the Caribbean with 5 countries and in South America with Paraguay. It is noteworthy that on the eve of Tsai Ing-wen’s trip, the deputy minister of Foreign Affairs of Panama, Luis Miguel Hincapie assured that his country has excellent relations with Taiwan despite the fact that the president has not planned to visit the country.

This statement immediately prompted observers to forecast that Panama, along with the Vatican and two small countries in Africa, could be one of the first to break off relations with Taiwan.

Dean of the Faculty of International Relations at the Beijing Languages Institute, Jia Lieying spoke to Sputnik in an interview, sharing his views regarding the president’s visit to Central America.

“China recently, officially restored diplomatic relations with Sao Tome and Principe. In regard to Taiwan, this was a severe blow to the country. At present, only about 20 countries have so-called ‘diplomatic relations’ with Taiwan and among them a large part is located in Central America,” Lieying said.

“Therefore, Tsai Ing-wen's visit to Nicaragua, El Salvador, Honduras and Guatemala can be said has ‘seen the script,’ The current authorities in Taiwan are trying to calm the situation, to bribe the interest of these countries in order to avoid being hit by the restoration of China's relations with Sao Tome and Principe,” the expert further said.

Moreover, it is possible that the visit aims to continue to develop the “diplomacy of the money-bags.” However, in the long-term perspective, an unfavorable situation around Taiwan looms.

Taiwan Not to Return to Confrontation With Mainland China - President
According to Lieying, today, all over the world including the United Nations, the principle of “one China” is recognized unanimously. It has not only a real unshakable foundation but also a solid basis in international law.

The Head of the Scientific Information Centre of the Institute of Latin America, Alexander Kharlamenko, told Sputnik that this is largely a deceit because Taiwan is a regional member of the Central American Bank for Economic Integration. “It puts investment into the region without even concealing their political orientation in order to maintain friendly relations with these countries,” Kharlamenko said.

The expert further said that the periodic trips by the Taiwanese administration to Central and South America and the Caribbean are done to obtain confirmation from the local officials for their support and loyalty to Taiwan.

This becomes especially important when a country has a change in presidency. This time, Tsai Ing-wen will take part in the inauguration of Nicaraguan President Daniel Ortega, which is due on January 10. The president was re-elected in November 2016.

“Taiwan should once again demonstrate its presence in Central America, although it has long since marked itself there. Such visits have been performed by each head of Taiwan for many years now. There is nothing new there. Right now we are talking about how to emphasize these ties in the new situation,” Kharlamenko said.

The political and legal statuses of Taiwan pivots on whether the island of Taiwan and Penghu are unified with the territories of Mainland China under the rule of the People’s Republic of China (PRC) or accepted as the independent Republic of Taiwan.

There are only few countries that support Taiwan in its claim for independence. The United States is one of its main allies and since the Taiwan Relations Act passed in 1979, it has sold arms and provided military training to the Republic of China Armed Forces.

However, this situation continues to be a point of dispute for China, which considers US involvement disruptive to the stability of the region.