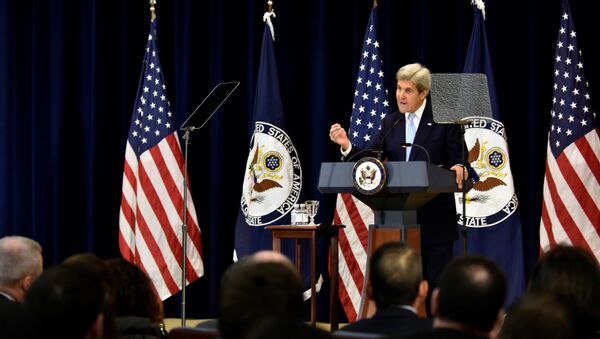 © REUTERS / James Lawler Duggan
Subscribe
International
India
Africa
US Secretary of State John Kerry said there was a chance that the administration of President-elect Donald Trump would find a way to repair relations with Russia.

MOSCOW (Sputnik) – Relations between Russia and the United States suffered another blow in late December, when the Obama administration announced the expulsion of 35 Russian diplomats, the closing of two Russian diplomatic compounds as well as new sanctions against six Russian individuals and five entities over Moscow's alleged interference in the November US presidential election and harassment of US diplomats.

"I can tell you that I think there is an opportunity here, still, for President-elect Trump and then President Trump to try to reach out to Russia and see whether or not they can put to test the proposition that we could find things in which we can agree and perhaps on some things on which we’re going to agree to disagree, but, nevertheless, put the world in a better place," Kerry said in an interview with the Public Broadcasting Service (PBS), released on Friday.

Kerry added though that he hoped the new president would not give up on the US foreign policy’s fundamental values and principles while making efforts to improve ties with Russia.

On Friday, the US Intelligence Community released a declassified report on Russia's activities and intentions related to the 2016 US presidential election, saying it had "high confidence" Moscow had interfered in the vote.

Russian officials have repeatedly denied the US allegations of election interference, characterizing them as absurd and nonsense. Moreover, they have said such allegations are intended to deflect US public attention from revelations of corruption and other pressing domestic concerns.

In a New Year message to the US president-elect, Russian President Vladimir Putin expressed hope that after Trump's inauguration the two countries would take real steps toward restoration of bilateral relations.