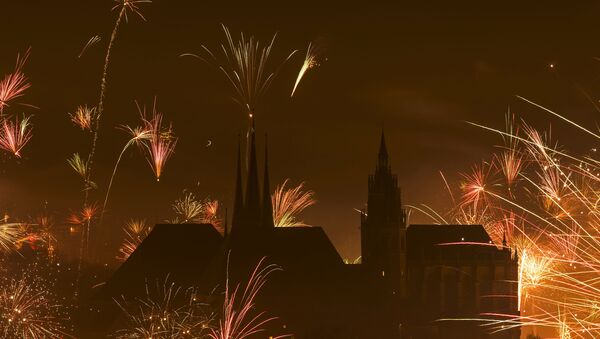 © AP Photo / Jens Meyer
Subscribe
German police and local newspapers are scratching their heads over a Breitbart story about a mob setting a church alight in their town that bears no resemblance to reality.

On January 3, Breitbart reported that "Germany's oldest church" had been set ablaze by a thousand-strong group of men chanting "Allahu akbar," citing the local paper Ruhr Nachrichten. The article also noted mockingly that the night was called "quiet" by local police.

The problem is, the composite image Breitbart created out of separate incidents that night does not represent the actual, relatively calm celebration of the New Year in Dortmund.

Yes, Ruhr Nachrichten reported January 5, there was a small fire at a church on New Year's Day. A celebratory firework set some scaffolding netting ablaze for a matter of minutes; the church itself was never in danger. The police have "no knowledge that the rocket was intentionally fired," a spokesperson told the paper. The church also isn't Germany's oldest.

As local media reported, throughout the evening groups of men large and small passed through the city center, and at one point a group of about 1,000 gathered in a central square. Fireworks were set off, most thrown into the sky, it appears in video, though some were thrown into crowds and aimed at police. A group of men chanted with a Syrian flag. The local paper notes that "there were no signs that terrorists were celebrating in Dortmund."

The local police, who were out in force that night, reported that the night was quiet overall and that only 185 citations were issued that night, down from 421 the previous year.

​​In fact, Dortmund has recently had brushes with violence - of the far-right variety.

The Guardian reports that tens of thousands read and shared the dishonest Breitbart version of events. "The danger is that these stories spread with incredible speed and take on lives of their own," Justice Minister of Hesse State Eva Kühne-Hörmann.

Gloves Are Off: German Vice-Chancellor Calls for Anti-Islamist 'Culture Fight'

German Chancellor Angela Merkel has been voicing concerns about "fake news" for the past few months. "I believe we should not underestimate what is happening in the context of the Internet and with digitalization; this is part of our reality," she told the German Parliament in November. "We have regulations that allow for our press freedom, including the requirement for due diligence from journalists. Today we have many that experience a media that is based on very different foundations and is much less regulated."

The German government has also proposed creating an "anti-disinformation center" to combat iffy online information, though much of the motivation for that seems to be to combat "Russian propaganda."

Breitbart's story remains online, without corrections. The company has announced plans to expand into France and Germany.

000000
Popular comments
Looks to me like the only real error was about it being the oldest church in Germany. The global media is in no position to criticize other media. People die with their lies. Any perceived harm by an outfit like Breibart is minuscule when compared to the globalists annihilation of all enemies, perceived and real.
jas
7 January 2017, 22:36 GMT1
000000
Why didn't they report them storming our synagogue?
deshepherdishere
7 January 2017, 23:13 GMT
000000
Newsfeed
0
New firstOld first
loader
LIVE
Заголовок открываемого материала
Access to the chat has been blocked for violating the rules . You will be able to participate again through:∞. If you do not agree with the blocking, please use the feedback form
The discussion is closed. You can participate in the discussion within 24 hours after the publication of the article.
To participate in the discussion
log in or register
loader
Chats
Заголовок открываемого материала
Worldwide
InternationalEnglishEnglishMundoEspañolSpanish
Europe
DeutschlandDeutschGermanFranceFrançaisFrenchΕλλάδαΕλληνικάGreekItaliaItalianoItalianČeská republikaČeštinaCzechPolskaPolskiPolishСрбиjаСрпскиSerbianLatvijaLatviešuLatvianLietuvaLietuviųLithuanianMoldovaMoldoveneascăMoldavianБеларусьБеларускiBelarusian
Transcaucasia
ԱրմենիաՀայերենArmenianАҧсныАҧсышәалаAbkhazХуссар ИрыстонИронауОssetianსაქართველოქართულიGeorgianAzərbaycanАzərbaycancaAzerbaijani
Middle East
Sputnik عربيArabicArabicTürkiyeTürkçeTurkishSputnik ایرانPersianPersianSputnik افغانستانDariDari
Central Asia
ҚазақстанҚазақ тіліKazakhКыргызстанКыргызчаKyrgyzOʻzbekistonЎзбекчаUzbekТоҷикистонТоҷикӣTajik
East & Southeast Asia
Việt NamTiếng ViệtVietnamese日本日本語Japanese中国中文Chinese
South America
BrasilPortuguêsPortuguese
NewsfeedBreaking
22:05 GMTOver 30 Hospitals in New York to Cease Elective Procedures Amid COVID-19 Surge
21:55 GMTFed's Powell Warns Omicron Poses Greater Risks to US Economy, Increases Uncertainty for Inflation
21:48 GMTPentagon Confirms Austin Ordered Inquiry Into 2019 US Airstrike in Syria That Killed Civilians
21:16 GMTGOP Senator Calls Biden ‘Mad Hatter’ For $1.75 Trn Bill, Says Based on ‘Alice in Wonderland’ Logic
20:54 GMTDisgraced Cuomo Continues to Receive State Pension Even Amid Ongoing Criminal Probe - Report
20:34 GMTLionel Messi Wins 7th Ballon d'Or
20:28 GMTNATO Chief Says Bloc Seeing Biggest Expansion of Defense System Since Cold War
20:23 GMTIns and Outs of Labour Leader Starmer's Front Bench Shake-Up
20:21 GMTProcess of Restoring JCPOA Will Not Be Easy, Russian Envoy Says
20:13 GMTSeven UN Staffers in Unexplained Detention as Ethiopia Arrests UNICEF Employee
20:00 GMTAfghan Air Forces Hold First Military Drills Since Taliban Takeover - Reports
19:58 GMTPhotos: Ethiopian Army Recaptures Strategically Important Town of Chifra, on Edge of Tigray State
19:53 GMTIsrael Pleads With Countries to Ignore Iran's 'Nuclear Blackmail', as Tehran Set to Salvage JCPOA
19:25 GMTIsrael Shares Intel With US, Allies on Iran Moving to Enrich Uranium to 90% - Reports
19:00 GMTGerman Court Rules Kohl's Widow Cannot Inherit $1Mln Compensation From Journalist
18:59 GMTShanghai Data Exchange: How China is Set to Outpace US in Data Trade & Technological Competition
18:57 GMTEx-US Capitol Police Officer Appears in Court for January 6 Related Charges - Reports
18:54 GMTFrance to Propose EU-UK Pact on Illegal Migration
18:50 GMTBeijing Has No Plans to Invite to Olympics US Politicians Calling for Boycott, Report Says
18:35 GMTMI5 v MI6: Tug-of-War Over a Triple Defector