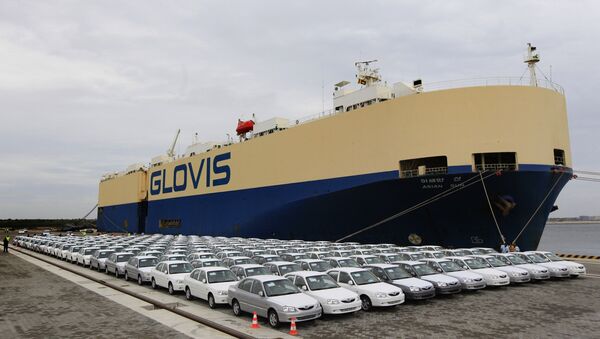 © AP Photo / Chamila Karunarathne
Subscribe
At least 25 people were injured during a protest in Sri Lanka January 7 over the launch of a special industrial zone intended to attract Chinese investment.

Sri Lankan Prime Minister Ranil Wickremesinghe and Chinese Ambassador to Sri Lanka Yi Xianliang both attended the opening ceremony of the Hambantota-Southern Development Zone, located near the port city of Hambantota, 150 miles from the capital, Colombo.

A court had issued a restraining order on the protest, fearing violence, but the protesters defied it. The launch was carried out despite the protests.

The violence apparently started when supporters of the zone started throwing rocks at villagers marching toward the launch ceremony. The opposition protesters, led by Buddhist monks, chucked stones at government supporters in response. A group that appeared to have been brought to the ceremony by the government then reacted by attacking the opposition protesters with poles, according to AP.

Opposition members of Sri Lanka's Parliament were among the protesters, local media report.

"We are against leasing the lands where people live and do their farming, while there are identified lands for an industrial zone," said DV Chanaka, a district politician, Al Jazeera reports. "When you give away such a vast area of land, you can't stop the area becoming a Chinese colony."

Sri Lanka's government has signed a framework agreement for a 99-year lease on the Hambantota port with a majority-Chinese owned company. An industrial zone where Chinese companies will be able to build factories is planned to be created around the port, AFP reports.

Nearby residents fear they will lose their land as the industrial zone spreads. The Sri Lankan government says there will be no forced acquisitions and that 95% of the land allocated for the project is already state-owned; the rest is to be bought from willing private sellers, they say.

The industrial zone will generate up to 100,000 jobs and bring in about $5 billion in Chinese investment, the ambassador said at the opening ceremony.

But the project has drawn criticism from many quarters, among them Buddhist clergy who worry about cultural erosion and opposition lawmakers who say Sri Lanka risks losing sovereignty. Last month, hundreds of temporary dock workers went on strike to demand they be taken on by the main owners of the port ahead of any sale to the Chinese, AFP reports.

Hambantota's deep-sea port has become a huge loss-maker for the Sri Lankan government. Envisioned as an anchor to support the development of a brand-new city, the port has struggled to attract ships and only exacerbated the island nation's debt crisis. Nearly all of the infrastructure built in Hambantota was done with Chinese money. Sri Lanka now owes China something along the order of $8 billion.

"The Hambantota port was going to sink us (Sri Lanka), but we are now trying to leverage it to create new economic activity and boost growth," Wickremesinghe said, according to AFP.

Magama Mahanama, from the Monks' Organization to Protect National Assets, told Al Jazeera, "Ninety-nine years means at least two generations. When they [the Chinese] take root here, what's the guarantee that we will have it back? There is a major threat of cultural erosion and demographic change."