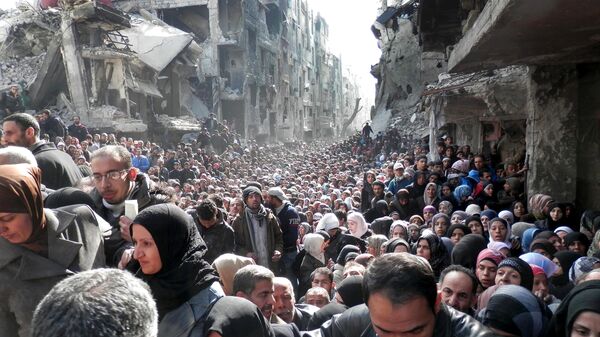 © AP Photo / UNRWA
Subscribe
International
India
Africa
Syrian refugees, desperate for money to get to Europe, are selling their organs on the black market, according to a number of experts who are investigating such cases. Radio Sputnik discussed this with Australia-based university academic Dr. Campbell Fraser, who explained how this market operates and how he was able to obtain this information.

A recent report by ABC news, a national news service in Australia, has revealed that Syrian refugees desperate for money to get passage to Europe are selling their organs on the black market. The profits are lining the pockets of organized crime and the very terrorist networks that the refugees are trying to escape.

Radio Sputnik discussed it with one of the men responsible for bringing the story to light, who was cited in the ABC’s report and who has been working with law enforcement agencies, investigating the links between organ traffickers and terrorist groups, Dr. Campbell Fraser from Griffith University in Australia.

"They want to get to Europe, but they have no money for the traffickers to send them to the continent and make all the arrangements for transportation and logistics," he told Sputnik.

The traffickers charge a high price for their services, he explained. So if those wishing to flee don't have any ready cash, they have to find some way of raising money. The traffickers however have learnt that people are "walking around with a store of money inside them."

Dr. Fraser further explained that selling a kidney means the patient and up to five members of his (her) family can make their bid for the safety of Europe, as a kidney on the black market can fetch about $100,000.

The market has gone way up in volume in just the last 5-6 years, he said. The traffickers can make bigger profits by taking a kidney from the people who want to get to Europe rather than taking cash from them. The traffickers actually prefer this method because they are making a lot more profit out of it.

A lot of the refugees are selling their organs, Dr. Fraser noted, explaining the mechanism of the sales. 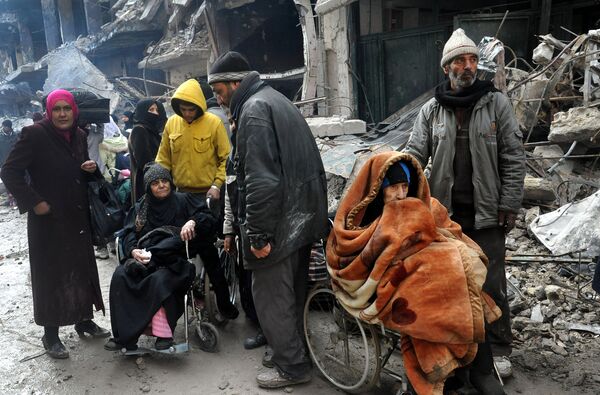 Palestinian residents of the besieged refugee camp of Yarmouk wait at the gate of the camp to receive aid supplies from the United Nations on the southern edge of the Syrian capital, Damascus (File)
© AP Photo / SANA

They start off in Syria, in some of the refugee camps, he said. He and his colleagues have uncovered evidence that the Yarmouk refugee camp (Palestinian) near Damascus has been a source for these people. They seemed to be able to get into Lebanon where they are first introduced to brokers who are able to arrange the further sale of the kidney.

The kidney is actually removed in Egypt, he said, which has very sophisticated transplantation facilities and good hospitals.

"One of the unique things about selling organs is not just the actual matter of selling an organ, there has got to be a way of getting that organ out of the seller and into the buyer," he told Sputnik.

Dr. Fraser further explained how he was able to obtain the above information.

EXCLUSIVE: Horrific Details Emerge of the Aleppo Rebel's Trade in Human Organs
In the vast majority of countries, the sale of organs is illegal, he said. But then you have countries where a grey area exists: it is technically illegal to sell organs but officials, after being paid off, turn a blind eye to the trade.

Therefore in some countries at the moment, particularly in North Africa where the rule of law perhaps is not as vigorously enforced as it might be in other countries, there is a thriving black market, he said.

Dr. Fraser has also revealed to Sputnik that he is a kidney transplant patient himself.

"I received a kidney transplant a number of years ago. I received my kidney legally here in Australia, but through that experience I met a number of people who travelled overseas to buy a kidney," he said.

"The only reason I am able to get this information is because I am actually a kidney transplant patient myself. I can understand people who are facing death, so actually I've got quite a bit of sympathy for the people who are buying and therefore they tend to talk to me a lot more," he told Sputnik.

World
Thousands Return to Now Peaceful Aleppo But You Won’t See It on CNN
"If you look at it from their perspective, all they are doing is wanting to survive. They are either going to die or they are going to buy an organ," he explained.

Dr. Fraser further noted that there are two sides to the story: both the organ sellers and the buyers are equally desperate. And this is why it is so lucrative, which means the brokers can buy low and sell high, generating huge profits.

"I tend to work more with the buyers of the organs and my colleagues in the law enforcement agencies that I share information with are looking at the sellers and the brokers. So we are looking for pieces of a jigsaw which could be put together and then we'll be able to get a fairly clear picture of what actually happened. And then we can write reports on how we see the situation," he elaborated.

There are literally thousands of people who have received transplants in this way, Dr. Fraser said.

The numbers are big enough for him and his colleagues to believe that organized crime, perhaps with links to terrorism, are using this as a method of serious fundraising.

He further explained why kidneys are by far the most commonly trafficked organ.

The reason is that it is possible to remove a kidney without harming the donor. Other organs generally require a person giving up the organ to be already dead. In addition, he said, kidneys are a lot easier to transplant.

In smaller but nevertheless more worrying numbers, there are fears that people are being killed for their organs, he said. One of the things that they are looking at very closely is whether bodies are being found with organs missing. There have been some cases in the Middle East, he said.

He further explained that the organs that require the death of the person giving them up are not sold on the open market, as they are not given up voluntarily as with a kidney. However the offers for such organs are very worrying, he said. There are actually people being killed for their organs, he acknowledged.